IEC to Celebrate Its 100th Anniversary at the 2011 Chem Show

International Exposition Company (IEC), producers and managers of the Chem Show and AHR Expo, will celebrate its 100th year in business at the 2011 Chem Show in New York City on November 1 -3. 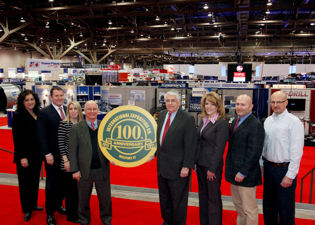 The company was founded by six business partners in New York City in 1911, the same year the first transcontinental flight took place from New York to California in 82 hours and 4 minutes. During the first few years in business, the company managed a variety of events ranging from automobiles to women’s apparel before launching the Chem Show in 1915. The biennial Chem Show has since grown to become one of the leading trade shows in North America and will celebrate its 96th anniversary at the Jacob K. Javits Convention Center in New York City in November.

Nearly a century ago when the then fledgling chemical processing industry was being threatened by having raw materials cut off by the pending war in Europe, Dr. Charles Roth, Chief Chemist for the Standard Oil Company, and IEC recognized the need to bring equipment manufacturers and chemical producers together to meet this challenge. From this dire need for the U.S. chemical industry to rapidly become more self-sufficient, the First National Exposition of the Chemical Industries was born in New York in the Fall of 1915.

Eighty-three manufacturers of processing equipment and materials came together to showcase their latest products and solutions to a few hundred chemical industry professionals, including a famous inventor named Thomas Edison. From those humble beginnings, the Chem Show’s incredible growth paralleled that of the early process industries. The 1916 Expo more than doubled to 188 exhibitors, and the 1917 Show more than tripled to 288 exhibitors (250% growth).

As the Industry grew, the Chem Show thrived as the primary marketplace where new innovations were being showcased on a regular basis. During the ensuing 94 years, North America’s leading CPI exposition and conference has experienced many challenges, including two world wars, several economic recessions, the shifting of chemical manufacturing overseas, new environmental initiatives and much more. However, through it all, the Chem Show remains the leading resource for CPI professionals to discover all that is new and innovative in marketplace.

The 2011 Chem Show is expected to attract more than 5,000 CPI professionals from around the world who are coming to see all the latest technological advancements on display from nearly 300 leading companies. It will also feature a comprehensive, three-day conference program created by the American Institute of Chemical Engineers (AIChE).

“Our 2011 exposition and conference will be much different than what Thomas Edison saw in 1915 but we will have the same mission statement – to bring CPI suppliers and end-users together to find solutions to their challenges,” said Clay Stevens.

The company has been owned and managed by the Stevens family since 1954 when Earl Stevens purchased it from his partners. Clay Stevens, Earl’s son and the current president, said he has witnessed many changes in the industry during the 40 years he has been involved with the company. Clay’s cousin Hank is the Chairman of IEC and has been with the company for 54 years. The third generation of Stevens is also actively involved in the company. Hank’s sons, Mark and Jeff, are responsible for Show Management and sales, and Clay’s daughters, Kelley and Kimberly, are instrumental in sales and marketing.