Atlas Copco’s Nomination Committee proposes Tina Donikowski and Mats Rahmström, appointed President and CEO from April 27, 2017, as new members of the Board of Directors of Atlas Copco AB. 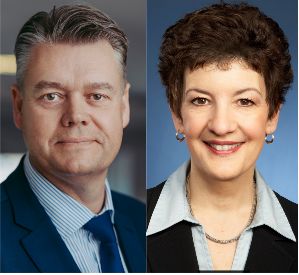 Tina Donikowski, born 1959, is a United States citizen with a B.Sc. in Industrial Management from Gannon University in the United States. Recently retired, she held the position of Vice President Global Locomotive Business for GE Transportation, a digital industrial leader and supplier to the rail, mining, marine, and drilling industries. Appointed Corporate Officer of General Electric Corporation in 2009, Tina Donikowski’s former positions include Vice President Propulsion Business, Six Sigma Quality Leader, and General Manager Aftermarket Sales and Service, all with GE Transportation where her career spanned more than 30 years.

Mats Rahmström, born 1965, is a Swedish citizen with an MBA from the Henley Management College in the United Kingdom. He is currently Senior Executive Vice President for Atlas Copco AB and President of Atlas Copco’s Industrial Technique business area. Mats Rahmström began his Atlas Copco career in 1988. Former positions include General Manager for customer centers in Sweden, Canada and the United Kingdom, as well as division president. He is a Board member of Permobil Holding AB and of CL Intressenter AB*.

Shareholders will vote on the Nomination Committee’s proposal at Atlas Copco’s Annual General Meeting on April 26, 2017, in Solna, Sweden.