The Grundfos Group has just received the much-coveted quality stamp by the Bosch Group, who, themselves, have been highly recognized for the quality of their products. Today, the company, which was established by Robert Bosch in Stuttgart in 1886, is one of the world’s leading suppliers of high-technology products and services. 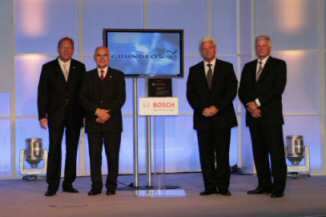 Every year, the Bosch Group places orders in the amount of EUR 20 billions and as one of the top suppliers – and the only Danish supplier – the pump conglomerate based in Bjerringbro, Denmark, has been awarded the Supplier Award.

In its evaluation of Grundfos, Bosch has in particular focused on reliability, quality and price. But also communication and the ability to cooperate as well as the will to constantly improve have carried a lot of weight as Bosch decided to single out Grundfos as the winner of the Bosch Supplier Award 2005/2006.

The CEO Søren Ø. Sørensen and Division Director Henrik Bonde received the award on behalf of Grundfos at a ceremony in Stuttgart. The CEO sees the award as a standard indicating how far the pump conglomerate has come in the global elite.

Last year, our Danish production company received the Business Excellence Award and with this significant recognition from a world-class company that I deeply respect, we have managed to prove that our company has advanced into the global super league", says Søren Ø. Sørensen.

Bosch is not just another of the global pump conglomerate’s customers. This is underlined by the fact that Grundfos sells nearly 1.3 million circulating pumps to Bosch every year. Bosch uses these pumps for gas and oil boilers for single-family house heating facilities. Every day, around 6,000 pumps are shipped from the Grundfos plants in Denmark, England and France to 19 different boiler plants in the Bosch Group.

“To Grundfos, it is both a gift and a challenge to have a customer that is so huge and demanding, because if we can make Bosch happy, we improve our chances to also make a lot of other customers happy”, says Henrik Bonde as a response to having received the award.

He sees many points of resemblance between the two global companies and in his opinion, the positive cooperation is primarily due to a shared systematic approach to securing of quality all the way through the process of developing, manufacturing, selling and servicing the products.

SEEPEX is pleased to announce Ellyn Chaney has joined the team as the HR Manager; the promotions of Joey Cherry to Director of Operations, Jeannie Raymond to General Manager for Stator Production, and John Salyers to Regional Sales Manager; and the retirement of Mike Dillon, former President.