The Institute of State Authorised Public Accountants and the Børsen newspaper awarded Grundfos the diploma of the best environmental report of 2002. The award ceremony took place at a conference on non-financial accounts information at Hotel d'Angleterre in Copenhagen on Wednesday, October 30, 2002. 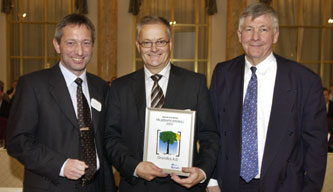 Grundfos' environmental report is described by the jury as "excellent": "Grundfos has demonstrated how simply and clearly a report can be made about the results a company has obtained in its environmental relations with customers, staff and the society as well as in financial matters," so the jury.

The structure of the Group environmental report is based on the Business Excellence model. It is described as "original and carefully prepared", offering its readers "a good and adequate knowledge of the connection between goals, achievements, and results."

Among other things the Group environmental report demonstrates that Grundfos has great success incorporating sustainability and environmental considerations in its products right from the development phase. The energy consumption during operation of newly developed products has been reduced by as much as 57 per cent compared with the products they replace and the consumption of materials for production has been reduced by up to 17 per cent.