Georg Fischer: Heat and Cold from the Bowels of the Earth

Urbanisation, one of the major challenges of the 21st century, is the guiding theme of the Expo 2010 in Shanghai. As people flock to cities in their millions, rethinking our approach to traffic, utilities and energy consumption has become essential. 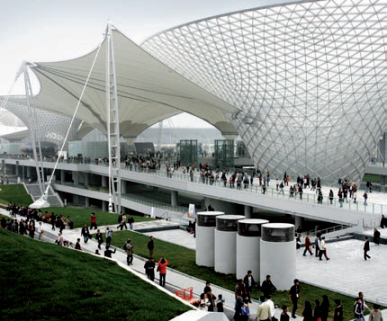 For Expo visitors, The Axis basically has the feel of a boulevard: they stroll around on the 1,200-metre long building under its bold tent construction.

The Expo’s main building, known as The Axis, is, appropriately, cooled and heated with an environmentally friendly geothermal system, a next-generation technology for which GF Piping Systems supplies the piping systems.

For some years now, the world has looked on China with both incredulous astonishment and admiration. It is as if this emerging economic power has set its sights on getting into the Guinness Book of Records in as many categories as possible. China has the biggest land surface of any country in East Asia, and its population of 1.3 billion is the world’s largest. Many regions of China are among the world’s most densely populated. The breakneck pace of industrialisation, along with the rise in the standard of living for many Chinese, has created a host of challenges that the People’s Republic has to surmount. Among these are urbanisation, population growth and the rise in energy consumption.

China’s conurbations have to cope with energy bottlenecks time and again. Companies and citizens alike are called on to save energy. The state is investing in technologies to develop wind, solar and hydro power. Last year, for the first time, China spent more than any other G20 country on clean energy, investing 34.6 billion US dollars. That is almost twice what the United States spends in this area.

Living better – in a better city

Given these pressing issues, the sustainable use of resources in China is becoming ever more crucial. It is therefore no surprise that the motto of the Shanghai Expo is ”Better City, Better Life“. The Expo’s main building is 100 metres wide and 1,200 metres long; oriented along an East-West axis, it is called simply the Axis. The structure is a benchmark for modern urban development. A futuristic, 40-metre high, coneshaped

steel-glass construction sits atop the building with its two underground and two overground layers. This central boulevard will be used by virtually every Expo visitor, and after the Expo closes it will become a shopping mall. Maintaining constantly pleasant temperatures for Expo visitors and future mall users on the 350,000 sq. metres of floor space of the Expo, Axis is a challenge for which the architects have chosen cuttingedge technology: geothermal power with piping systems from GF Piping Systems.

Geothermal technology for heating and cooling

To use the heat inside the Earth for the Axis, a heat exchange system was installed in the concrete piles, which at the same time serve as the building’s foundation. In winter, from December to the end of April, a heat pump provides heating by transferring the Earth’s warmth from a depth of 25–40 metres into the building. In summer, the heat pump channels heat from the building into the Earth in order to cool the structure. A cycle is created in which heat that is superfluous in summer disappears into the Earth and is then retrieved in winter when it is needed again. The heating and cooling functions are natural opposites. But geothermal power is more than just heating and cooling; it can also be used to generate electricity.

The circulation medium is water. The water is channelled through polyethylene pipes from GF which the construction workers attached to the reinforcing cages that buttress the

The World Exhibition 2010 Shanghai gives companies an opportunity to reach large numbers of people from all over the world as well as trade specialists within a very short period of time. And, what’s more, in a country where the use of geothermal power is bound to be a major factor in the long term. After all, geothermal power is a renewable energy source which would seem to be inexhaustible. In Europe, too, geothermal technology is gaining ground. Many commercial buildings, for instance furniture outlets that have large surfaces, employ this technology. The sustainable use of resources is becoming increasingly crucial worldwide, and efforts are being made in many places to realize the Expo motto of ”Better City, Better Life“.