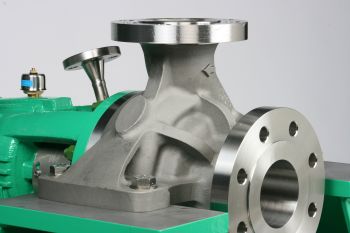 Engineering and contacting company Siirtec Nigi from Italy has recently placed an order on Amarinth for €500K of API 610 OH2 pumps for a gas dehydration and glycol regeneration package. Destined for the Abu Dhabi National Company for Onshore Oil Operations (ADCO) Al Dabb’iya Facilities Development Phase III project, Abu Dhabi, the stainless steel pumps are required on an tight 27 week delivery schedule which, taking into account the summer holiday period, will probably reduce to some 25 working weeks. Amarinth was selected for this project based on its previous successful deliveries of high specification pump packages to ADCO against similar tight timescales.

The Al Dabb’iya Facilities Development Phase III project involves increasing production by an additional 73,000 barrels of oil per day to achieve a total production of 145,000 barrels of oil per day 2018 which will be achieved by drilling 114 wells in new on shore and off shore clusters, extending existing clusters and adding new process trains to the existing central processing plant.

The order for eight API 610 OH2 pumps, two with Plan 53B seal support systems, require 3.2 material certification for all critical components including casings, impellers, shafts and seals. The pumps will also undergo extensive witnessed non-destructive examination (NDE) and non-destructive testing (NDT) which will be accomplished using state-of-the-art radiography and ultrasonic testing at Amarinth’s manufacturing plant in the UK.

Oliver Brigginshaw, Managing Director of Amarinth, commented: “We are delighted to win this significant contract from Siirtec Nigi which recognises our depth of experience with ADCO high specification projects and which once again underlines the growth we are seeing of European engineering and procurement companies delivering into prestigious projects in the Middle East.”