Spectacular climax to a modernization project for the Bratsk hydropower plant in Russia: an Antonov AN124-100 cargo plane, one of the largest aircraft in the world, flew the first of six new Voith runners manufactured in the Austrian town of St. Pölten from Vienna Airport to Bratsk in Siberia, a journey of some 7,000 kilometers. 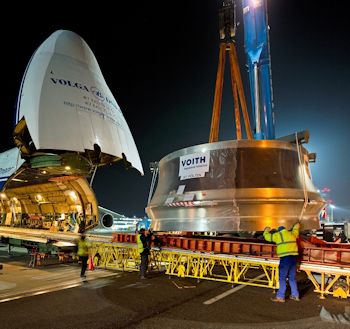 The runner has a diameter of 5.6 meters and weighs 73 tons. Air transport is at the request of the client, as it considerably shortened the time to installation for the new hydropower component.

Voith Hydro received the order in September 2011 from Irkutskenergo, Russia s largest energy provider. The Bratsk power plant consists of 18 units of 255 megawatts each; at six of them the runners are being replaced by Voith runners.

"We had already provided the turbine control device for the Bratsk hydro-power plant from 2000 to 2005. With these new runners we are once again supplying state-of-the-art technology to Bratsk,” comments Dr. Leopold Heninger, Chairman of the Management Board of Voith Hydro St. Pölten. “The new runners perform better and are more effective than the old ones.” He emphasizes how valuable the long-term and trusting relationship with Irkutskenergo is.

The Bratsk hydropower plant is situated by the Angara River, the only outlet from Lake Baikal, and when it was commissioned in 1967 it was the world s most powerful hydropower plant generating a total of 4,500 MW from 18 machine units. Producing around 30,000 GWh a year, it is still one of the highest producing hydropower plants in the world.