When you are upgrading one of Europe’s largest sewers which currently serves 3.5 million people, increasing capacity by 60% and taking into account a predicted population increase of 10% by 2021, it’s understandable why they are regarded as ‘Super sewers’. These are the scale of the upgrades being undertaken by Thames Water at their Beckton and Crossness sites in East London. 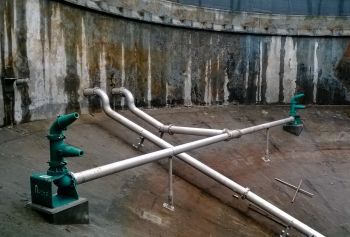 These new super sewers are feeding significant volumes of sewage and effluent to the upgraded treatment works and Vaughan Choppper pumps are playing a vital role in meeting the challenges of the increased capacity at the treatment works.

The projects, valued at £190m for Beckton and £220m for Crossness, will boost the site’s treatment capacity by 44% and will significantly reduce the volume of storm sewage that often overflows into the Thames water course during and after heavy storm events. Furthermore, with waste increasingly regarded as a source of alternative energy, a key part of both projects involves the extraction of biogas from the organic waste within the sewage processed at both sites. The biogas allows self-sufficiency in powering the plants through CHP (Combined Heat & Power) generating systems, while selling excess energy back into the National Grid is another possibility.

Extraction of the gas is performed by 12 anaerobic digesters across the two sites and each digester uses a pair of Vaughan HE6W10-277 Horizontal Chopper Pumps driven by 30kw/4 pole WEG motors, selected and supplied by P&M Pumps Ltd.

Each pump set is sited outside the digester but are literally the beating heart of the large scale ROTAMIX systems by pumping through just four floor mounted double nozzle assemblies inside each 3600m3 digester quickly achieving a complete and dynamic mix, suspending all organics, fats, oils and grease (FOG), grit and non-organic solids into a homogenous slurry.

Commenting on the project, Matt Harvey, Director at P&M Pumps said, “This application is extremely demanding as the load on the chopper pumps can be exacerbated by the substantial debris that can sometimes reach the pumps in spite of the upstream filters.

The WEG motors proved to be the ideal solution to the challenges arising at the Beckton and Crossness sites. In addition to their ATEX conforming EExd rating the motors operate at higher efficiencies which to the minimum requirement of their IE2 rating and an important factor in contributing to the projects overall energy efficiency. Furthermore, it addresses 90% of total operational costs attributed to energy expenditure over the lifetime of typical motors used in pumping applications.

are making an important contribution to the success of AD plants at numerous installations across the UK.