The Kaplan Turbine Celebrates its 100th Birthday: Great-Grandson of the Inventor Visits Voith in Heidenheim

History unites: On 7 August 1913, Viktor Kaplan registered the patent for the Kaplan turbine in Austria - and 100 years later his great-grandson Roland Athenstaedt with two of his sons returns to a workplace of Kaplan that was vital for the development of the Kaplan turbine: Voith in Heidenheim. The three Athenstaedts visited Voith in order to get am impression of the place where the history and the future of hydropower merge. 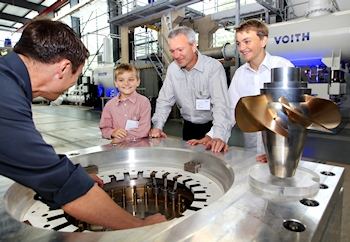 Roland Athenstaedt with his sons Tobias and Philipp at the Brunnenmühle, the global test and research center of Voith Hydro in Heidenheim. They are joined by the Head of the Hydraulic Laboratory, Peter Funk. (Image: Voith)

"My children are currently looking at forms of renewable energy at school. I therefore thought it would be a good idea to explain hydropower to them and show them the company where their great-great-grandfather had carried out active research," says Roland Athenstaedt. Like his sons, the 46-year-old engineer is quite fascinated by the sustainable character of hydropower plants, which often last across generations and supply eco-friendly electricity. During a tour through the production department and the global test and development center "Brunnenmühle“ in Heidenheim, Roland Athenstaedt and his children gained an insight into one of the world s leading production sites for hydropower components. Here, Kaplan turbines are still being designed and produced.

The history of the Kaplan turbine is closely associated with the development of Voith. Viktor Kaplan visited the company for the first time during a study trip in 1912. A number of study and research visits followed over the next few years, during which he made frequent use of the company s former test laboratory in Hermaringen near Heidenheim. The contact between the former Voith CEO Walther Voith and Viktor Kaplan gradually intensified. They became friends, which is documented by the many letters exchanged between them. Regarding the development of the Kaplan turbine, Viktor Kaplan once called Walther Voith the "discoverer of my invention." Later, during the 1920s, Kaplan granted Voith the option to utilize the US patents of his turbine, if he had received half of the license earnings.

Voith promoted and still promotes the application of Kaplan turbines

In 1922, Voith began with the production of Kaplan turbines and manufactured two units for the power plant of the Steyrermühl paper mill in Upper Austria. The business with Kaplan s invention rapidly increased, and in 1928 Voith built four machine sets for the power plant Rheinkraftwerk Ryburg-Schwörstadt with Kaplan turbines in record dimensions. Each of them had a diameter of 7 meters. At the time they were the largest Kaplan runners in the world.

During the last decades, Voith became one of the most important manufacturers of Kaplan turbines. At present, for example, Voith in Heidenheim is about to refurbish four large Kaplan turbines for the modernization of Bad Säckingen hydropower plant on the Rhine. They have a diameter of 7.4 meters. This is just one of the numerous hydropower modernization projects which Voith carries out all over the world.

In addition, more and more energy suppliers use innovative Kaplan turbines for their plants: so-called fish-friendly Kaplan turbines are particularly popular in the United States. Since the invention of the Kaplan turbine, energy companies have purchased nearly 10,000 units for their power plants. Worldwide, Kaplan turbines with a capacity of approximately 200 GW are installed. This corresponds to the output of about 200 large coal-fired power stations.

The Hydraulic Institute (HI) recently published the one-of-a-kind guide exclusively for the application and operation of pumps in combined-cycle power plant service. 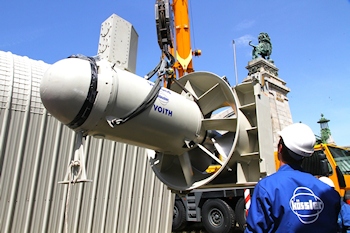