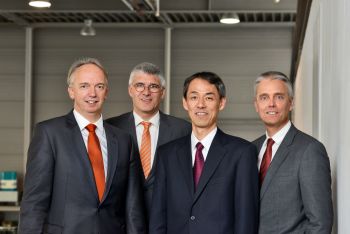 Since the start of 2013, the Pumps and System unit at Lewa Group has been headed up by Naota Shikano and Stefan Glasmeyer, responsible for Sales and Marketing, and Dr. Martin Fiedler, in charge of the Operations.

“This step to form a strong division, reorganize the structure and align our activities where it makes sense will help to serve our customers globally in a better way. It also will generate operational efficiencies within the Industrial division” says Naota Shikano, who has been assigned as a Director and Vice President of Nikkiso group as of March 16th 2016, being responsible for Nikkiso group s industrial business segments.

The Industrial Division headquarters will be based in Leonberg Germany, the home of the LEWA group , which is why the current company management is to be extended. 50-year-old Peter Wagner will serve as the new CEO, while Hisanao Amino (54) has been appointed as Chief Financial Officer.

Stefan Glasmeyer and Martin Fiedler complete the Management team and correspondingly expand their responsibilities in the reorganized Group. This management will drive and foster the integration within the Industrial division.

As a graduate mechanical engineer, Wagner held various posts at Atlas Copco from 1995, initially in compressor project management, as an engineer specializing in quotations, in quotation management and most recently as President of the Atlas Copco Gas and Process Division. In addition, he also served as Chairman of the Supervisory Board at Atlas Copco Germany.

After studying business at the University of Tokyo, Amino spent 30 years working for The Bank of Tokyo-Mitsubishi UFJ, Ltd., before joining Nikkiso Co., Ltd. as General Manager in the Medical Administration Department, Medical Division, in 2014. His expertise lies in the fields of finance, asset liability management and risk management. With stays in New York and London under his belt, he can look back on 13 years of experience working abroad.

Image: Stefan Glasmeyer, responsible for Sales and Marketing, and Dr. Martin Fiedler, in charge of the Operations, complete the Management team and correspondingly expand their responsibilities in the reorganized Group(Image: Lewa GmbH)