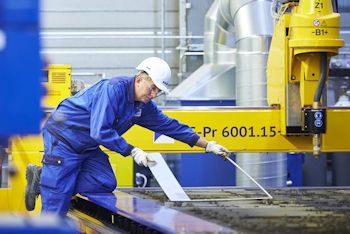 For the full year, Sulzer expects a slight decrease of the order intake on a currency-adjusted basis. However, the current volatile market environment, particularly in the oil and gas industry, affects visibility.

In the first quarter of 2015, order intake decreased by a nominal 3.4% to CHF 800.5 million. On a currency-adjusted basis, orders decreased by 0.6%. Order intake in the first quarter of 2015 was positively affected by a large order received by the Tower Field Service business unit of the Chemtech division. Currency-adjusted order intake in the Pumps Equipment and Rotating Equipment Services divisions both declined by 5.3% and 7.5% respectively due to fewer large orders. The currency translation effect amounted to a negative CHF 23.3 million or 2.8%. This occurred mainly as a result of the strengthened Swiss franc against major currencies after the Swiss National Bank’s decision to discontinue the minimum exchange rate of CHF 1.20 per euro mid-January 2015.

Sulzer’s largest key market, oil and gas, saw a significantly lower order intake for new equipment across all regions. A number of projects especially in the Pumps Equipment division have been suspended or postponed to next year. Brazil, the US, and China were especially affected by the slowdown. Demand for rotating equipment services was stable in the Americas, while Europe, the Middle East, and Africa (EMEA), and the Asia-Pacific region were behind last year’s figures.

In the power market, Sulzer had a good start into the year. The main driver was high demand in the Asia-Pacific region and EMEA. Asia-Pacific is likely to remain a growth driver for 2015 because energy consumption is fueled by the economic growth in the region.

Sulzer’s Full Potential Program is progressing according to plan. More details on this program will be provided with the midyear results.

The markets remain highly volatile because of current developments in oil prices, regional conflicts, and geopolitical developments, which are further impacting visibility and calling for caution. In this context, Sulzer confirms its guidance for a slight decline in order intake for the full year on a currency-adjusted basis. The order intake in the second quarter of 2015 is expected to be at a similar level as in the second quarter of 2014.

In this context, Sulzer also predicts the sales and profitability profile for the company to be more back-end loaded in 2015 than in previous years. This is mainly because of margin pressures in the oil and gas market and some Swiss franc transaction effect, offset by first positive effects of the Sulzer Full Potential program. As a result, for sales and operational EBITA, Sulzer expects flat development for the full year 2015 compared with 2014 on a currency-adjusted basis.

In the first quarter of 2015, order intake of Pumps Equipment decreased by a nominal 9.5% and by 5.3%, adjusted for currency effects. The decrease was mainly driven by the oil and gas market whereas the power, the water, and the general industry grew.

The low oil price negatively affected the activity in the oil and gas market, leading to project suspensions and postponements to next year. The power industry had a better-than-expected start into the year in terms of order intake, with growth mainly coming from Asia-Pacific and EMEA. Demand in the water market improved compared with the same period in 2014, except for the Asia-Pacific region, where China showed a slow start into the year. Activity in the general industry also improved compared with the first quarter of 2014; especially the Asia-Pacific region showed some good growth. An improved pipeline of projects in engineered water as well as good prospects in the general industry should allow for slight growth.

For the full year 2015, Sulzer expects currency-adjusted order intake of Pumps Equipment to decrease, mainly driven by lower demand in the oil and gas market, which will only be partially offset by higher order intake volumes in the power and water market as well as in the general industry.

Demand in the oil and gas market in general was good, leaving Rotating Equipment Services less affected by the low oil price than the other divisions. Activity in the power market was low because of the timing of larger projects in EMEA and Asia-Pacific. The division reported decreased demand in the general industry segment in the Americas and the Asia-Pacific region, while activity in EMEA was stable.

In the first quarter of 2015, order intake increased by nominal 17.8% and by 19.9%, adjusted for currency effects. The increase was mainly fueled by a large order from the Middle East in the Tower Field Service business unit.

Excluding the large order in Tower Field Service, demand in the oil and gas market for the Chemtech division was relatively stable compared with last year. However, with regional variances: North America and EMEA developed well and compensated for the weak demand in China and Southeast Asia. The process technology business and the general industry—namely the mixing and dispensing business—again achieved the previous year’s level.

For the full year 2015, Sulzer expects a slight increase in order intake for Chemtech on a currency-adjusted basis, supported by the single large order mentioned above.