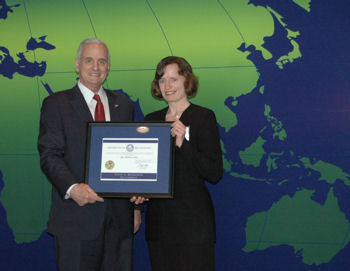 Each year, Minnesota’s governor honors a select group of Minnesota businesses that have shown exceptional progress and success in international trade by conferring the Governor’s International Trade Award. In addition to honoring individual recipients, the award also recognizes the tremendous positive effect that exports and trade have on the state’s economy and job growth.

“We are truly honored to be recognized by Governor Dayton for our international business efforts,” Lauseng said. “During the past several years, Jet Edge has worked tirelessly to increase our international sales and enter new markets, including Asia, Eastern Europe and the Middle East. We have benefitted tremendously through our participation in Governor’s trade missions to Japan, China and Israel, and through the outstanding support of the Minnesota Trade Office and U.S. Commercial Service.”

Jet Edge has sales offices throughout the United States and in Shanghai, China, as well as distributors in Canada, Mexico, Europe, Asia/Pacific, South America and the Middle East/Africa. The company derives approximately 26% of its total revenue from international sales and has seen three consecutive years of growth in machine tool export sales. The water jet manufacturer broke an all-time record month for shipments in June 2011, including first-time shipments to new export markets in China and Poland.

Jet Edge’s recent international endeavors include opening a sales, service and training office in China, establishing an R&D partnership with waterjet manufacturer Tecnocut S.p.A. in Italy and establishing new export sales for Jet Edge in Japan, China, South Korea, Poland, Italy, and the Middle East. The company also has established a rigorous training program for all international distributors to ensure they are equipped to provide optimum service and support to Jet Edge’s overseas customers.