Global subsea pumps market was valued at more than a billion USD in 2014 having been contributed mainly by the demand from offshore production activities in North and South America and Europe. 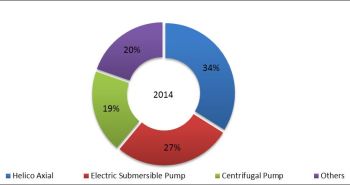 Global subsea pumps market was valued at more than a billion USD in 2014 having been contributed mainly by the demand from offshore production activities in North and South America and Europe. However, oil price decline in midyear 2014 and post December has affected capital investments majorly all across the world limiting the growth prospects of in 2015 and 2016.

E&P capital expenditures surged in 2013 and 2014 with 2013 having witnessed peak oil price and significant Capex of nearly $700 billion in overall exploration and production activities globally. Subsequently, the year 2015 has witnessed more than 20 percent investment dip in comparison to 2014. This is further expected to decline in 2016 by another 5 to 10 percent. However, from the end of 2017 and after, oil price is anticipated to stabilize and start climbing to reach at least $80 a barrel by 2018 rejuvenating the overall market growth including that of subsea pumps.

According to MarketsandMarkets, Subsea pumps market which stood under one billion USD in 2013 is expected to be fairly similar or lower level in 2015 and 2016 respectively. Helico-Axial, Electric Submersible and Centrifugal subsea pumps together dominated the market holding more than 80 percent share in 2014. Helico-Axial and Twin Screw pumps are the most recommended for subsea multiphase boosting operations as well as Electrical Submersible Pumps when used in combination with Helico-Axial. Subsea boosting is the single largest application and will continue to dominate the market in the coming years. This application held more than half of the market in 2014 creating opportunities for Helico-Axial and Twin Screw pumps as well as Electrical Submersible Pumps.

The year 2015, which has been less optimistic for oil & gas investments and with many cancelled E&P projects, witnessed few major contracts in the subsea area. One such contract is signed in first half of the year by OneSubsea, a joint venture between Schlumberger Limited (US) and Cameron International Corporation (US), for the supply of 15,000-psi subsea pump system in the Gulf of Mexico by Shell.

E&P Capex cuts in 2015 have stimulated mergers, joint ventures and technological partnerships with key focus on efficiency improvement by few key players. In the subsea area, some include, a 50:50 joint venture between FMC Technologies (U.S.) and Technip S.A. (France) done in June 2015, Aker Solutions’ alliance with Fjords Processing (Norway) in April 2015 and the recent announcement of collaborative agreement between Fuglesangs Subsea (Norway) and Ruhrpumpen (Germany).

Subsea Processing systems market, the super set of subsea pumps, in the current market scenario of low oil price regime and with stiff competition between regions is set to grow slowly in the next five years. By 2018, when the oil price is anticipated to reach $80 a barrel, delayed and cancelled subsea projects are likely to resume and push the market growth for subsea systems including subsea pumps.

Mats Rahmström, President and CEO of the Atlas Copco Group, comments on the report for the second quarter of 2020.