The four-year contract covers an initial design and construction phase, followed by a three-year operation period. Site work will begin in August at an existing recycled water plant site near Melton and project completion is expected by early 2008.

The new Surbiton Park Recycled Water Plant will be capable of producing 1.3 million gallons (5 million liters) of Class A recycled water per day. The plant will serve primarily the new township of Eynesbury, south of Melton. This 2,900-lot development will feature equine facilities, a championship golf course and extensive parkland.

The recycled water will be used for toilet flushing, residential garden watering, recreational irrigation and fire fighting, and will reduce the use of drinking water in the new growth areas by 50 percent, or 1.1 million gallons (4.2 million liters), per year by 2030. It will also accommodate future growth at Melton South, which has been identified as a future growth area that will see a new city of 37,000 homes, 90,000 residents and the creation of an estimated 26,000 jobs.

This is the third Class A recycled water scheme in Victoria; the others are the Eastern Irrigation Scheme, which Earth Tech designed and currently operates, and the Werribee Irrigation District Project. These projects not only address the area’s ongoing growth demands, but the government’s mandate to conserve water, as well.

“The greater Melbourne area, like elsewhere in Australia, is facing a considerable challenge: how do they accommodate the water needs of a growing population when water supply is at nearly 30% of capacity,” said Peter Everist, Earth Tech’s Group General Manager for Global Water Projects and Products in Australia. “This new Class A recycled water plant will help Western Water meet its conservation goals and continue its strategy for integrated water resource management.”

The new plant will consist of a pre-treatment facility, a UV disinfection system and a membrane micro-filtration system. It will supersede the existing facility, which currently produced Class C recycled water for construction work at Eynesbury and the irrigation of crops at Surbiton Park.

Currently, Earth Tech is Australia’s largest supplier of Class A recycled water, with approximately 43% of the supply coming from its Virginia Pipeline Scheme in South Australia and Eastern Irrigation Scheme in Melbourne’s eastern suburbs.

Earth Tech Inc. is a global provider of a full suite of engineering, construction and operations services to the international water/wastewater, environmental, transportation, and facilities markets. A business unit of Tyco International Ltd., Earth Tech employs some 7,000 talented people, delivering services to customers in 15 countries. Founded in 1970, Earth Tech is headquartered in Long Beach, Calif. More information on Earth Tech can be found at www.earthtech.com. 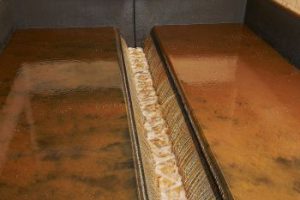 ISH digital with an Extensive Programme of Events