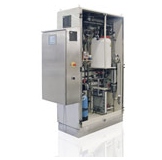 The extremely low chloride content is significantly below the level of comparable processes in which more than 20 times as much chloride is often produced. The surfaces of pipes, machine parts and equipment are not attacked by the minimal chloride concentration; corrosion is reliably avoided. Considerable cost savings can be made due to the low consumption of energy and salt and the fact that no preservatives are used in beverage manufacturing processes.

In contrast to conventional processes which often convert around just 5 percent of the sodium chloride, Smart Disinfection, developed by the Heidelberg-based manufacturer, converts around 85 percent. At the same time, operating costs are significantly reduced by the minimal use of resources.