“Proceeding with our clean-up, in the third quarter, the assessment of bad old projects in power in particular leads us to take another hit in earnings to finish unprofitable business, make the company fit in structure and create profitability potentials also in a tough environment. We have seen delays in order decisions in some areas but still note robust business for the time being,” Malek Salamor, CEO of the Christ Water Technology Group comments on the Q3 figures.

At € 65.1 million for the quarter, CHRIST registered average order intake bringing new orders for the first nine months to € 188.9 million. Compared to last year this figure was down by 30% due to the retreat from unprofitable Power Business and a big desalination order received in August last year. As a consequence also order backlog was down 24% to a sound level of € 192.3 million and a number of good order chances to fill the pipeline again.

Sales advanced by 13% to € 225.2 million mainly driven by the Pharma & Life Science division with the inclusion of the Zeta Group. For the third quarter, sales of € 70.4 million were registered. Nine-month EBITDA fell to € -3.3 million and EBIT to € -9.9 million. Thereof, negative impacts of power business and clean-up cost effected the EBIT with € -16.6 million in total, losses in power business accounted for € -9.8 million, the cost for restructuring and terminating business activities and inactive projects mainly in Food & Beverage accounted for € 6.8 million out of that. Consequently, the healthy business operations in Pharma & Life Science, Microelectronics, Process Water & Reuse and Municipal Water Treatment reached a clean EBIT of € +6.7 million for the first three quarters. In including the full amount of negative effects in Power and mainly Food & Beverage the isolated Q3 EBIT was -13.4 million (previous year: +1.8 million).

The net financial result grew to € -2.1 million bringing earnings before taxes to € -12.0 million. Due to a positive tax bill out of profitable businesses as well as movements in deferred taxes, the net result reached € -14.0 million for the period ended Sept. 30, 2008.

Operating cash flow was € -14.4 million (previous year: € -7.1 million) as a result of the losses incurred as well as the existing working capital requirements mainly in municipal contracts. Net debt grew to € 71.1 million (versus € 42.2 million at 31.12.2007. With the majority to be long term financed via the € 50 million corporate bond (due 2013, 5.25% coupon) and existing short term credit lines to back up the liquidity. Group equity declined to € 50.8 million or 21.9% of balance sheet total.

Malek Salamor: “For the full year, based on the order backlog and our assessment of markets, we expect CHRIST to generate sales of roughly € 300 million. For the current fourth quarter, stabilising the results and risk situation is the key management focus and lays the foundation for a positive development in 2009. We have taken a rigorous cost cutting and structural optimization course effective for the entire Group. With the disciplined order and sales approach accompanied by professional project execution and further potential major strategic decisions soon to be taken we work to re-establish profitability.” 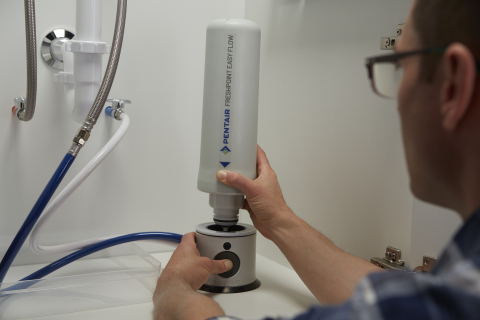 Global water treatment company Pentair has announced the launch of the FreshPoint Easy Flow Under Counter Filtration System. This drinking water system installs quickly and easily, and provides refreshing, filtered water straight from the tap for up to a year* with a single filter.