Voith Celebrates Dedication of Badger Hydro Plant in the US 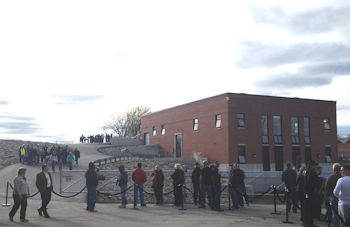 Voith was heavily involved in the project, as Voith Hydro supplied two Kaplan turbines and automation equipment, while Voith Turbo provided the speed increasers. The 7 megawatt-plant has a 50-year license from the Federal Energy Regulatory Commission. It is estimated that 4,000 households will benefit from the clean, reliable energy produced by the Badger Hydro Plant.

“The Badger Hydro Plant is exciting not only for Kaukauna Utilities and its customers, it’s one of Voith’s flagship projects,” said Voith Chief Operating Officer at Voith Hydro York, Stan Kocon. “The Badger plant seamlessly combines technology from two of Voith’s divisions in a power plant that will provide additional clean and renewable power to Kaukauna Utilities customers for generations to come.”

The Badger Hydro Plant is indicative of much of the current focus of the U.S. hydropower industry. Many utilities and developers are retrofitting existing hydropower plants such as Badger to increase output, or turning to the United States’ approximately 80,000 non-powered dams and other water infrastructure to add hydropower production. Voith Hydro is involved with many of these projects, including the expansion of PPL Generation s Holtwood Hydroelectric Facility in Pennsylvania, AMP’s Ohio River Projects, and Missouri River Energy Services’ Red Rock Hydroelectric Project in Iowa.

“Though hydropower is one of our oldest sources of energy, it remains one of the most dynamic,” Kocon continued. “As we have done for over 135 years, Voith Hydro looks forward to harnessing the power of our water resources to provide low-cost and low carbon-emitting hydropower to homes and businesses across the U.S.”