Power Plants Will Spend $3 Billion for Pumps this Year

Operators of fossil and nuclear power plants will spend over $3 billion in 2014 for pumps to move water, slurries and condensate. East Asia will be the leading purchaser. This is the conclusion in Pumps World Market published by the McIlvaine Company. 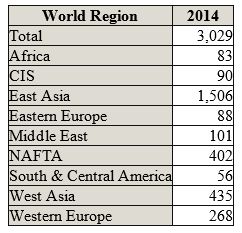 The market in Western Europe is primarily a substitution of other forms of power for coal-fired power plants. For example Flowserve, received multiple orders for key pumping systems for the Lichterfelde Cogeneration Power Plant. The orders were booked in the first quarter of 2014. Located in Germany, the 300-megawatt (MW) plant replaces an old coal-fired power plant. The Flowserve pumping systems at the heart of this power plant use heavy-duty, radically split, multistage between bearings pumps for boiler feed service (BFP) and canned vertical turbine pumps for condensate extraction (CEP). In addition, Flowserve will also provide the pumps for the district heating process.

In East Asia the big market is new coal-fired power plants. “KSB has been awarded contracts by two Chinese power plant constructors to supply four new-generation boiler recirculation pumps. The pump sets are destined for the two new Chinese power stations: Laiwu in the province of Shandong and Taizhou in the province of Zhejiang. The boiler recirculation pumps from the LUVAk series are designed for a pressure of 400 bar and an operating temperature of 425°C”.

The market in the Middle East involves mainly oil-fired plants which also desalinate seawater. KSB is providing equipment to the YANBU 3 power station in Saudi Arabia that also comprises a seawater desalination plant. For this project, the company will supply over the next years mainly 15 large high-pressure boiler feed pumps with variable speed drives of a total value far beyond €30 million.

From startup in 2017, the power station fired with heavy fuel oil and located at the shores of the Red Sea will generate more than 2700 MW of electricity at five units. It will be used to supply electricity to the west of the country, for example, to cities like Jeddah, Mecca and Medina. The associated seawater desalination plant, which will make use of the power station s electricity and accumulated steam, is to provide 550,000 cubic meters of drinking water per day.