North American Municipal Drinking Water Plants Will Spend Over $3.5 Billion on New Hardware, Instrumentation and Treatment Chemicals. This is the conclusion reached by the McIlvaine Company in reviewing the projects it is tracking in North American Public Water Plants and People. 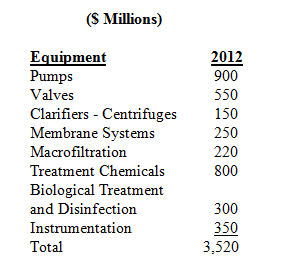 Several thousand of the larger plants will make 80 percent of the investment, whereas the 10,000 smaller facilities will account for only 20 percent.

This investment is only 12 percent of the total investment which will be made by the industry this year. The $30 billion total includes all the distribution investment and maintenance plus non equipment expenditures at the treatment facilities.

There are more than 50,000 requests for quotation issued by the operating companies.

A novel approach is being used by some of the smaller agencies. More than thirty water and wastewater agencies from seven Bay Area counties in California are saving money on chemical purchases through a bidding consortium spearheaded by Dublin San Ramon Services District (DSRSD). The Bay Area Chemical Consortium (BACC) is an informal cooperative that advertises and opens sealed competitive bids and then prepares bid recommendations. Once bids are opened, participants enter into their own contracts with the lowest responsive bidder.

Some of the purchases are being made by contractors rather than the cities. Veolia is operating 600 water and wastewater facilities in North America including a large Tampa Bay municipal plant which treats 120 mgd. Suez, through its United Water subsidiary, is serving over seven million people in the U.S.