The new Afriso rainwater system centre RWSC II is a further development of RWSC, a complete solution for rainwater harvesting which was launched in 2005 and convinced the market with its superior performance and robustness. 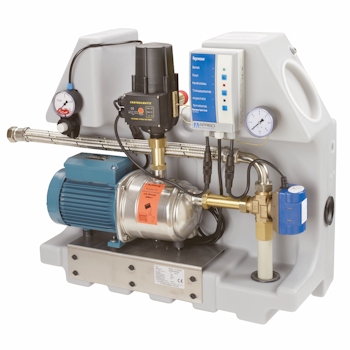 The new version RWSC II features a servo-controlled diaphragm valve with a vertical linear guide to ensure maximum reliability, superior durability and a long service life. RWSC II can be used as a fully automatic rainwater harvesting system together with plastic and concrete rainwater storage tanks as well as rainwater storage tanks converted from fuel oil tanks. RWSC II primarily uses rainwater from the cistern to water the garden, flush toilets and do the laundry. If there is not enough rainwater in the rainwater storage tank, RWSC II automatically switches over to mains water backup and supplies drinking water (probe-controlled). A short rain shower is usually sufficient for RWSC II to switch back to rainwater mode (standard mode). RWSC II is a robust unit that combines all components such as a three-way valve, pump, pressure switch, processor unit and display on top of the backup tank. The new RWSC II is available with a centrifugal pump for a distance to the rainwater storage tank of 15 m or with a jet pump for a distance of between 15 and 40 m. The system is fast and easy to install and commission. RWSC II is used in single- and two-family homes as well as in small and medium-sized companies and industrial operations. It provides an efficient and environmentally friendly way of counteracting rapidly increasing drinking water and waste water costs.

Picture: In conjunction with all standard rainwater storage tanks, the new AFRISO rainwater system centre RWSC II can be used as a fully automatic rainwater harvesting system to water the garden, flush toilets and do the laundry. RWSC II complies with DIN 1988, DIN 1989, EN 12056 and EN 1717 as well as the DVGW directives and excels with superior robustness and reliability. (Photograph: Afriso)