In September 2017, the Bombay Exhibition Centre (BEC) in Mumbai will once again be the venue for environmental technologies and solutions tailored specifically to the needs of the Indian market.

In light of the current situation, the focus of the supporting program at the fifth edition of IFAT India, India’s leading environmental technology trade fair, will be on the topic of air pollution control. According to a recent study by the Indian branch of Greenpeace, smog is assuming serious proportions on the subcontinent.

It is not just the capital New Delhi that is affected by massive air pollution. The study has shown that fine particulate pollution in the 168 cities studied exceeds the limit defined as harmless. Looking at the average annual concentration of fine particulate matter of under 10 micrometers in size, no single city in India complies with the international standard of 20 μg/m³ considered by the World Health Organization (WHO) to be harmless. Alongside its effects on health, polluted air also results in economic costs totaling three percent of gross domestic product – according to an estimate by the World Bank.

From September 26 to 28, 2017, IFAT India will bring together all the market players in the areas of water, sewage, refuse, and recycling in Mumbai. For the first time, the topic of air pollution control will be part of the supporting and conference program: At the Environmental Technologies Conference organized by the Indian cooperation partner The Energy and Resources Institute (TERI), high-ranking representatives from politics and business will discuss possible solution approaches and regional strategies for reducing pollutant emissions. Instruments for monitoring and forecasting the air quality in congested urban areas will be presented in a workshop by the SDG Foundation. 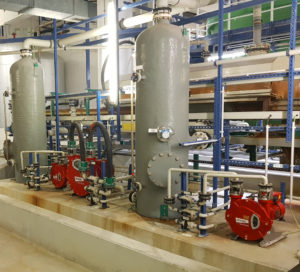 In order to stay within strict emissions thresholds, coal-fired and energy-from-waste (EfW), steel plants and oil and gas refineries, use lime to remove sulphur dioxide (SO2) from their flue gas output.