The most powerful generator-turbine unit ever built by Voith has entered service in the Chinese hydropower plant Xiluodu on the Jinsha River. After a successful 72-hour test run, Voith handed over the first of a total of three such machines to the customer China Three Gorges Corporation. 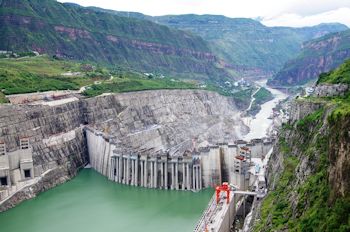 With 784 megawatt the output of the generator-turbine unit in Xiluodu is higher than that of the world s largest hydropower plants and consequently sets new standards.

"This remarkable achievement is an important step towards the first one-gigawatt unit. Congratulations to the entire Voith team that has made a contribution to the largest ever single project at Voith Hydro," said Dr. Roland Münch, Chairman of the Management Board of Voith Hydro. At the same time he emphasized that Voith met the high test standard in China without any errors and that the machines are running with high precision.

Power generation from hydropower is playing an increasingly important role in China. Voith is one of the worldwide leading technology partners for power plant operators. About five years ago, the company started to equip Xiluodu hydropower plant with components. Each of the three Francis turbines supplied by Voith has an output of 784 megawatt; each attached air-cooled generators is rated at 855.6 MVA. With a weight of 1,350 tons, the generator rotor has a diameter of 13.7 and a height of four meters.

The installation of the first such Voith machine unit in Xiluodu started approximately one and a half years ago in close cooperation between Voith Hydro in Shanghai and the global Voith research and development laboratory for water turbines and generators. The construction of the machines was officially completed with the finalization of the 72-hour test run, which was monitored round the clock by the Voith engineers.

When Xiluodu is fully connected to the grid in June 2014, it will have a nominal capacity of 13.86 gigawatt with its altogether 18 machine units. This will make it the world s third largest hydropower plant and a major contributor to fewer pollutants in the atmosphere: thanks to the renewable energy generation of Xiluodu, the annual consumption of coal will be cut down by 41 million tons. In addition, exhaust gas emissions will be reduced by nearly 150 million tons of CO2, 480,000 tons of nitrogen dioxide and 850,000 tons of sulphur dioxide per year.

China is one of the largest hydropower markets. At the moment, the country has installed hydropower plants with a capacity of 250 gigawatt. But there is room for more electricity from hydropower: a total output of 466 gigawatt could be generated.

The Importance of Hydropower

Hydropower is the largest, oldest and most reliable form of renewable energy generation. Worldwide, it makes an indispensable contribution to stable power supplies and hence to economic and social development - both in industrial countries and in emerging markets. Hydropower also makes a significant contribution to climate-protecting energy production.