On June 20, Grundfos executives welcomed representatives from the offices of Governor Mike Pence, Congressman André Carson, Mayor Greg Ballard and other elected and community leaders in celebrating the 40th anniversary of Grundfos’ presence in the U.S., as well as the 90th anniversary of its Peerless Pump brand. The ceremony included the official opening and ribbon-cutting of the company’s new welcome and customer center. 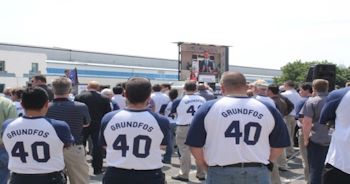 Grundfos expanded to the U.S. in 1973. Since then, Grundfos USA has grown to more than 1,300 employees in five major facilities nationwide and has $500 million in annual revenue. The company’s success is due, in part, to its Peerless portfolio, which Grundfos acquired in 2007 to strengthen its North American presence.

"We are strongly committed to the Indianapolis community", said Jes Munk Hansen, president of Grundfos North America. "Within the first two years of our acquisition of Peerless, Grundfos’ investments in the Indianapolis facility were greater than the former owner’s investments in its previous 15 years combined. We have invested an estimated $15 million since 2007 and plan to continue investing here as well as our other facilities in the US as we strive to obtain our goal of becoming a $1 billion company here in the US."

Grundfos’ investment plans for its Indianapolis facility, which is home to its Peerless Pump brand, will include systems upgrades, machining and assembly equipment, and additional staff. Peerless manufactures products for a variety of industries – municipal, power, industrial, process, commercial and agricultural – and leads the market in fire protection applications.

"With our skilled manufacturing workforce, centralized location and pro-growth environment, international companies like Grundfos recognize that Indiana is a state that works for business", said Victor Smith, Indiana Secretary of Commerce. "We appreciate Grundfos’ continued commitment and investment in our state and look forward to witnessing its continued growth in Indiana."

"Since the company’s move to Indianapolis in 1947, Peerless has been an important downtown employer", said Indianapolis Mayor Greg Ballard.-

"We’re encouraged by Grundfos’ commitment to develop and invest in our local workforce and their continued efforts in innovation, technology and sustainability. They are an important asset to our city."

The anniversary event follows the facility’s annual golf tournament to benefit Camp Riley, a program that helps Indiana youth with physical disabilities to gain independence. In the past 13 years, Peerless employees have raised more than $500,000 for the organization.