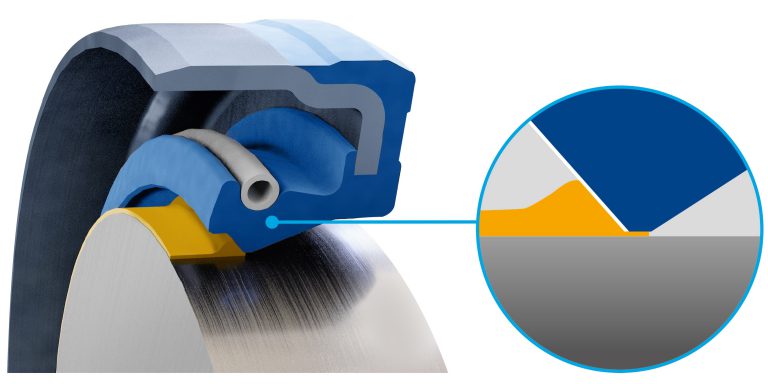 The engineers at Freudenberg Sealing Technologies (FST) and Freudenberg Technology Innovation (FTI) have developed a new coating that forms a flexible bond with the elastomer of the seal and significantly improves wetting with synthetic lubricants.

Thanks to different materials and shapes, radial shaft seals for sealing rotating shafts can be used in a wide variety of industrial applications. What they all have in common is the demand for the lowest possible friction, low wear and reliable sealing effect. Optimum lubrication of the entire tribological system depends on permanent wetting of the sealing lip. This poses a particular challenge for poorly wetting lubricants based on polyglycol, which are used in drive technology, for example in worm gears. Too little wetting increases wear on the sealing lip and can also lead to increased shaft runout due to contact with the shaft, which ultimately necessitates replacement of the machine parts.

A flexible bond over a long service life
Freudenberg Sealing Technologies (FST) has developed the new 75 FKM 585 plus coating to achieve optimum lubrication in gears and pumps with synthetic lubricants. "We have succeeded in coating the sealing lip in such a way that polar oils distribute much better," explains Dr. Matthias Adler from FST s global materials development department in the Simmerring Industry division. "The mechanics of the layer have been modified so that it forms a flexible bond with the elastic material of the elastomer over a long service life – even under dynamic load. In addition, the coating is applied where no wear occurs.” The current development was specially designed for customers who already use the standard Simmerring 75 FKM 585 in drives for which the use of polyglycol oils is recommended by the manufacturers.

The elastomer is coated using plasma-assisted chemical vapor deposition (PE-CVD). In this process, the elements in the process gas form a chemical bond with the surface of the base body. The decisive criterion for the optimization of the wetting behavior is the targeted modification of the interaction between the coating and the synthetic lubricant. The measurements show that by using special components in the new surface coating such as carbon, oxygen and silicon in a certain molar ratio, optimal wetting can be achieved compared to the standard material 75 FKM 585.

New technology can be transferred to other materials
The layer thickness of 75 FKM 585 plus is a few hundred nanometers and its properties meet the standards of the manufacturers of industrial gear units with regard to oil/elastomer requirements. Although it is designed for particularly low wear at high revolutions, it has been shown that the coefficient of friction is significantly lower than that of the standard material, even at low speeds such as in the breakaway forces and mixed friction ranges. The newly developed technology is not limited to applications with FKM, adds Dr. Adler, "but can also be transferred to other materials. Initial tests on NBR and EPDM have also shown positive results in optimizing the interaction between coating and poorly wetting oils.”