Changes are on the horizon at the top of the Endress+Hauser Group. With effect from 1 January 2014, Matthias Altendorf will be the new CEO of the family-owned company. Klaus Endress, who has led the Group since 1995, will at the same time take his seat in the Supervisory Board. Preparations for the succession have been going on for some time. 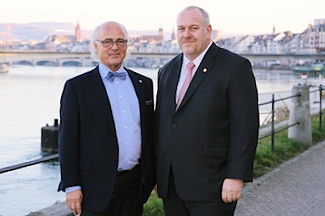 From 2014, Matthias Altendorf will be the new CEO of the Group – Klaus Endress transfers to the Supervisory Board (Image: Endress+Hauser)

Klaus Endress (64) has in recent years repeatedly announced his plans to withdraw from operative business. It was also known that, for reasons of age, no other member of the shareholder family would follow him right now. "We want to avoid speculations and discussions," explained Klaus Riemenschneider, President of the Supervisory Board. "Announcing the succession at an early stage will provide clarity and smooth the transition."

The new CEO will be Matthias Altendorf, until now Managing Director of Endress+Hauser s largest plant in Maulburg, Germany, and since 2009 also a member of the Group s Executive Board. 45-year-old Altendorf has spent his entire working life at Endress+Hauser, beginning with a mechanic s apprenticeship at the Maulburg plant followed by advanced training and further education. Working for Endress+Hauser Flowtec in Reinach, Switzerland, Altendorf took on more and more responsibilities in various positions until moving up into management as Marketing Director in 2000. In 2005, Altendorf finally returned to Maulburg as Managing Director.

The Supervisory Board, Klaus Riemenschneider stressed, has taken this decision "in close consultation with the shareholder family and with their full support". Klaus Endress underlined the importance of the time frame: "Mr Altendorf can hopefully be a good CEO of the Endress+Hauser Group for a long time – and if possible build a bridge to a younger member of the family as his successor."

Endress described Altendorf as an "Endress+Hauser man through and through, reflecting the culture, values and convictions that characterize our company", guaranteeing that the transition will be successful. Klaus Endress himself wants to ensure continuity by transferring to the Supervisory Board where he will follow its President Klaus Riemenschneider. 69-year-old Riemenschneider has held this position since 2002 and has announced his withdrawal by the end of the year.

A successor for Matthias Altendorf has also been found. Effective from 1 January 2014, Dr Andreas Mayr is to be the new Managing Director of the competence center for level and pressure measurement engineering in Maulburg, Germany. 51-year-old Mayr holds a PhD in physics. He has worked for Endress+Hauser in Maulburg since 1998. As Director of Technology, he has been a member of the management team since 2010.