- Inflow of orders: SEK 8,312 million (7,312), a rise of 4 percent for the current structure of the Group after adjustment for the effects of exchange rate movements.

- Invoiced sales: SEK 7,495 million (6,851), on a par with last year, exclusive of the effects of acquisitions and exchange rate movements.

The Group's inflow of orders during the period amounted to SEK 8,312 million (7,312), which is a rise of 4 percent for the current structure of the Group after adjustment for the effects of exchange rate movements.

Invoiced sales amounted to SEK 7,495 million (6,851). Adjusted for the effects of exchange rate movements, this is a rise of 2 percent, which is mainly attributable to company acquisitions.

Operating earnings during the period amounted to SEK 418 million (460), exclusive of restructuring costs of SEK 44 million at Cardo Pump, providing an operating margin of 5.6 percent (6.7). In the third quarter, Cardo Door's earnings were affected by the fact that sales of residential garage doors in Germany remained weak. Cardo Pump's earnings, exclusive of restructuring costs, were better than during the corresponding quarter last year despite the fact that in Germany sales remained weak and margins lower. Cardo Rail's deliveries of completed orders were lower this quarter compared with the same period last year, resulting in somewhat lower earnings.

The impact of exchange rate movements on Group earnings is estimated to have been marginally beneficial.

Cardo Pump is one of Europe's largest manufacturers of pumps, mixers and aerators and a global leader in the production of sophisticated measuring instruments for the pulp and paper industry.

After adjustment for the effects of exchange rate movements, the inflow of orders was 5 percent higher than last year, despite weak demand in Germany and the UK.

Demand increased in Cardo Pump's biggest segment, water and wastewater, as did demand from the process industry. In the building services segment, demand was somewhat lower than last year, mainly owing to the weak demand in Germany.

During the third quarter, a number of significant orders were received from the pulp and paper industry, including one for pumps for the papermaker AKPC in Thailand. The Nine Dragons company in China ordered 130 pumps and 42 mixers, an order that is a breakthrough for Cardo Pump in the Chinese paper-industry market. In the water and wastewater segment, orders received included a big one from Turkey for wastewater pumps and ones from Korea and Norway for 48 and 40 mixers respectively. In Dubai, an order was received for 24 big wastewater pumps.

Invoiced sales amounted to SEK 1,972 million (1,783), which adjusted for the effects of exchange rate movements is a rise of 2 percent. Operating earnings amounted to SEK 113 million (133) exclusive of restructuring costs as specified hereunder. Including these costs, earnings were SEK 69 million. Earnings for the third quarter were better than those for last year before provision for restructuring.

In connection with the half-yearly report, cost-saving measures were announced for Cardo Pump, especially as regards operations in markets with falling demand. The action program and its cost were decided upon and made public in early October. The program mainly comprises staff reductions and the closure of some regional offices. The cost amounts to SEK 44 million and has been charged to earnings for the third quarter. The measures are expected to improve earnings by approximately SEK 30 million and to take full effect as of 2003. The objective is to achieve an operating margin of 10 - 11 percent for the business area within a two-year period.

Cardo is an international engineering group with strong positions in the markets for doors, pumps and rail-vehicle brake systems. Cardo operates in lines of business that, taken together, provide strength and make the Group less susceptible to fluctuations in the business cycle. Operations are conducted within the Group's three business areas: Cardo Door, Cardo Pump and Cardo Rail.

Cardo has subsidiaries in about 30 countries, principally in western Europe. In 2000, Cardo had a turnover of SEK 9.8 billion and employed roughly 8,000 people.

Cardo Pump is one of Europe´s largest manufacturers of pumps, mixers and aerators and a global leader in the production of sophisticated measurement instruments for the pulp and paper industry. Cardo Pump is well-known under its brand names ABS, Pumpex and Lorentzen & Wettre. 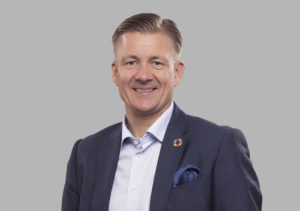