World industrial pump sales will grow at 4 percent/yr to $46 billion in 2017. This is the latest forecast in Pumps World Markets published by the McIlvaine Company. 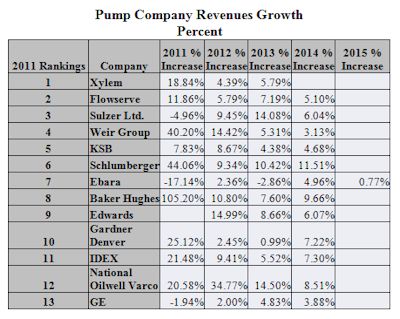 The forecast is in constant 2010 dollars. When inflation is included, revenues will rise by more than 5 percent/yr over the next five years.

The revenue growth rate for the largest pump suppliers will exceed the 5 percent average for two reasons:

Projections for revenue growth by the companies and independent analysts have been tabulated.

Xylem generates 70 percent of its revenues from its “transport” or pump group. The other 30 percent comes from “trial” and “test”. Analysts are expecting close to 6 percent revenue growth in 2013.

Analysts anticipate an average growth of 6 percent for the second largest supplier, Flowserve. Relatively high rates of growth are forecast for Sulzer, Weir, KSB and Schlumberger. GE is projecting relatively low growth. However, its pump group generates a small share of total revenues.