Voith was operating in the black in all three Group Divisions, Hydro, Paper and Turbo, of the core business and achieved a significant increase in both sales and EBIT across the Group. Once again, orders received exceeded the high figure for the previous year.

At €2.34 billion, Group sales were noticeably higher (up by 14 percent) than the level achieved in the same period of the previous year (€2.06 billion). With an adjustment for currency effects, this equates to an increase of 11 percent. At €2.71 billion, the value for orders received was slightly higher than for the previous year (€2.63 billion). At €6.8 billion, the value for orders on hand recorded on the reporting date of March 31, 2022 increased compared to the already high level of the previous year (€6.25 billion), and thus reached an all-time high. Voith also achieved a significant increase in the operating result in the first six months. EBIT increased by 15 percent to €94 million, while annual surplus was at €16 million. The equity ratio increased to 22 percent and the liquidity situation remained stable.

“Against the background of the current global crises, which are already having a significant impact on our markets, we can be satisfied with the development we have seen in the first six months: Voith continues to remain in strong operational and financial shape. Our broad sectoral and geographic positioning has also played a role in this, as has our focus on sustainable technologies, which are becoming increasingly important,” explains Dr. Toralf Haag, CEO of the Voith Group.

“The current discussion on the rapid expansion of renewable energies and energy security clearly demonstrates the strong position we now find ourselves in. This was a direct result of our strategic focus on sustainable technologies in all three of our Group Divisions – with hydropower as a key renewable energy, resource-conserving paper production, and alternative drive technologies. We will continue to develop our portfolio in these areas and, in doing so, make our contribution to industrial sustainability,” says Haag. “This is also reflected positively in our figures.”

Solid development in all Group Divisions
In the first six months, the Voith Hydro Group Division recorded stable sales of €487 million compared with the previous year. As a result of the cyclical project business in the hydropower sector, Voith Hydro achieved a lower value for orders received than in the same period of the previous year, however, this remained at a solid level (€577 million). The operating result was positive at €3 million.

Voith Paper continues on its growth trajectory. Sales increased significantly to €1.07 billion in the first six months (previous year: €832 million). Voith Paper achieved another noticeable increase in the value for orders received to €1.24 billion, which corresponds to growth of 9 percent. The Group Division was also able to confirm the same positive trend in the operating result, which was significantly improved to €70 million (previous year: €53 million).

Despite a market environment that was experiencing a loss of momentum in the field of mobility solutions, the Voith Turbo Group Division recorded a noticeably higher value for orders received of €844 million, which was attributable, in part, to a revival of investments in the industrial sector. At the same time, Voith Turbo was able to report an increase in sales of 5 percent to €742 million (previous year: €707 million). EBIT also increased to €21 million in the first six months (previous year: €18 million).

Outlook: Economic downturn expected
The increasing uncertainty generated by the highly challenging and volatile market environment we are currently experiencing, with the war in Ukraine, lockdowns in China, material price increases, and supply chain disruptions, has already impacted the operating result of the Voith Group in the first six months of fiscal year 2021/22. Even though the effects of the extraordinarily difficult framework conditions are difficult to assess for the business in the second six months, the Voith Group is standing by its goal of increasing sales and earnings in the current fiscal year and thus continuing on a path toward profitable growth. 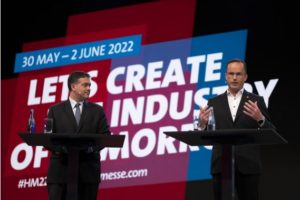