Mr. Williams has served as a member of the Company’s Board of Directors since November 2013 and as the Company’s President and Chief Executive Officer since February 2014.

Clay C. Williams remarked, "I would like to personally thank Pete for his many years of extraordinary service and dedication to National Oilwell Varco. Pete has provided this company and its employees over 12 years of exceptional leadership and has, during that time, overseen almost unprecedented corporate growth. We will all miss Pete and we wish him and his family the absolute best.”

National Oilwell Varco, Inc. also announced that it has completed the spinoff to its stockholders of its distribution business as an independent public company, NOW Inc. (“NOW”).

“This action demonstrates National Oilwell Varco’s commitment to provide long-term value to our stockholders,” said the Company’s Chairman and CEO Clay C. Williams. “With its strong management team in place, NOW is well-positioned to be a successful independent company.”

NOW common stock will begin regular-way trading on the New York Stock Exchange under the ticker symbol “DNOW” on June 2, 2014. 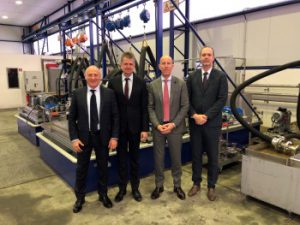