Lewa Supplies a Major Gas Project in the Persian Gulf

For development of two huge offshore gas fields in the Persian Gulf, 40 process diaphragm pumps were ordered from the German company Lewa GmbH. The order, valued at about 30 million Euros, is the largest to date in the history of the company. 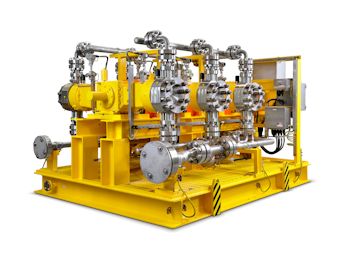 Once the project is completed on schedule in 2015, the Gulf facility will be the largest of its kind in Saudi Arabia: It will be capable of processing 70 million m³ of ethane, propane, butane, and natural gas per day from the two offshore fields, producing about 50 million m³ of market-ready gas. The potential for demand peaks or in extreme situations is as high as 86 million m³.

The Lewa pump systems will be installed on thirteen wellhead and two tie-in platforms (drilling and conveyor platforms) and used at operating pressures of 140 to more than 500 bar to inject monoethylene glycol (MEG) and sulfur solvent. The MEG continually circulates between the platforms and the glycol regeneration units in the onshore preparation facilities, reducing the emergence of hydrates in the two underwater pipelines. A great challenge is that the sulfur content of the two gas fields is at a significantly higher concentration than in other areas, and starts to solidify at high temperatures. To prevent blockage of the pipeline and ensure reliable transport on land, a solvent for the sulfur must be reliably and continuously injected.

Although the states of the Gulf Cooperation Council, to which Saudi Arabia belongs, placed fewer large orders in the Western countries in 2012 than in 2011, German specialty suppliers are still in demand. In particular when technically challenging oil and gas projects and petrochemical facilities or power plants are involved, manufacturers such as Lewa can score. "The company is known in the industry for its experience with demanding projects and for the high quality of its products. The harsh conditions – high pressures and extreme temperatures – under which the pump systems must work reliably are the main reasons that Lewa was awarded the contract," explains the project lead and sales engineer Vassilios Tenidis from Lewa headquarters.

The conclusion of the contract represents the high point of the company s development to date. "In the last eight years, despite the economic crisis, Lewa has seen yearly double digit growth, so the sales figures of the group have more than doubled over that period," explains the head of the Corporate Development department, Florian Kieninger. To keep up with incoming orders, the company has recently purchased land on which they plan to build a new assembly building. This investment should ensure timely deliveries and provide the space needed for the growing number of employees.

Picture: 40 process diaphragm pumps valued at about 30 million Euros have been ordered from the German company Lewa GmbH for a major gas project in the Persian Gulf. The pumps will be used in Saudi Arabia for the injection of monoethylene glycol (MEG) and sulfur solvent. (Image: Lewa) 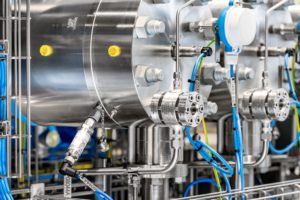 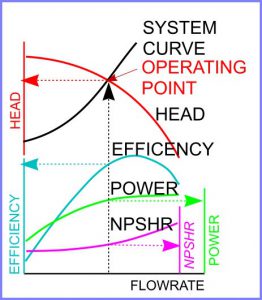