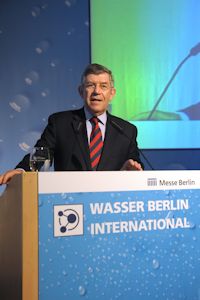 From 1991 Dr. Fritz Holzwarth was at the Federal Ministry for the Environment, Nature Conservation and Reactor Safety (formerly the BMU, as of December 2013 the BMUB), where in 1996 he became head of the Water Management Department. He held numerous senior water management posts at government level as well as in Europe and worldwide and was responsible for inland waters and ocean protection.