The ‘Stratford Box’ is an integral part of Phase 2 of the Channel Tunnel Rail Link (CTRL). It is approximately 1072m long, 55m wide & 13m deep at the centre (narrower but deeper at the ends) and has been built to house the Stratford International and Domestic Station. 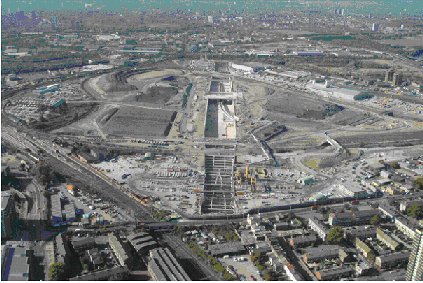 Though CTRL Phase 2 and the station will not be finished until 2007 the ‘Box had to be built at an early stage – starting in 2001 – in order to launch the tunnel boring machines that were to dig towards St.Pancras Station, to the west, and eastwards to a site at Barrington Road, Newham : tunnel boring is now complete.

The ‘Box’ is effectively a huge concrete lined trench, comprising diaphragm side walls on a slab base, cut into the native geology through a thin layer of Made Ground laid down prior to adoption of the area for railway use in the 19th century. The west end of the ‘Box’ abuts the River Lea and water bearing river alluvium layers form the highest natural geological strata. This is underlain, in turn by a series of clay, sand and gravel beds above the Upper Chalk. Within the latter is a lower aquifer in which the water table is rising by about a metre a year.

Though the ‘Box’ has been designed to avoid inundation from the River Lea – and other measures are in place to dispose of rainwater – it wasn’t built to resist the uplifting effects of the rising groundwater (in a ‘Worst Case Scenario’ the structure could start to float like a gigantic concrete barge – no doubt lifting unevenly and causing unpredictable stresses which would result in structural failure). In order to avoid any such problems it was decided to maintain the lower aquifer water level 10m below the base slab and a permanent de-watering system has been installed using submersible pumps in 22 boreholes drilled 30m into the chalk.

The client for the contract is Union Railways (North) Ltd. with Rail Link Engineering acting as Project Managers. Skanska Construction UK Limited were awarded the contract for the main ‘Box’ (CTRL Contract 230) in January 2001 and they have chosen 6” ‘E-Tech’ pumps & ‘Mercury’ motors from Proquip Direct Limited to perform the vital task of de-watering. Each borehole pump set is rated to raise as much as 43m3 of water per hour (11.9 litre/second) but has been fitted with a frequency inverter driven motor so that the exact output can be fine-tuned to site requirements. ‘E-Tech’ pumps & ‘Mercury’ motors were chosen for the permanent installation as their robust construction has gained them an enviable reputation for operation in ‘difficult’ boreholes since they were introduced to the market fifteen years ago. 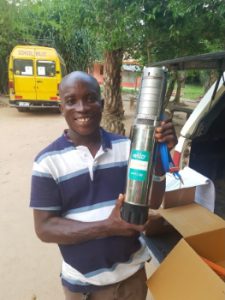 In some parts of the world, being able to take running water from the tap is not a given by any means. Water resources are becoming increasingly scarce, water quality continues to fall. With its solar-powered Wilo-Actun Opti borehole pump, the Dortmund-based technology company Wilo has created a stand-alone solution to tackle this challenge. 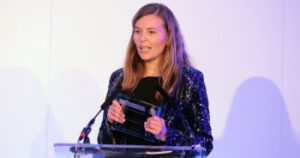 Grundfos won the award for Company of the Year in the global water and wastewater pumps market at the annual awards show of consultancy company Frost & Sullivan recently held in London.