Metropolitan Family Services, an organization that provides services and counseling for Chicago families in need and the recipient of the 2012 AHR Expo Innovation Awards donation, has reported monthly savings of approximately $300 from the HVAC controls they purchased with the money. 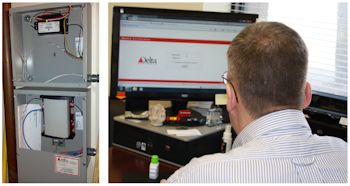 AHR Expo donated nearly $12,000 to Metropolitan on January of 2012, consisting of fees exhibitors paid to enter the awards competition. The organization used that money to help upgrade the controls for the rooftop HVAC units and boiler system at its Midway Center located on Chicago’s Southwest side.

According to Ted Thelen, Metropolitan s Facility Director, the facility spends approximately $50,000 a year on energy costs with almost half of that amount used to operate the rooftop HVAC units and the boiler. “The new controls upgrade allows both systems to work in tandem more efficiently and provide consistently comfortable room temperatures for the facilities year-round,” Thelen calculates. “In addition to covering nearly triple the current square footage, we should realize close to $4,000 in energy savings per year.”

“For more than 156 years, Metropolitan Family Services has been helping thousands of families cope with various challenges through a variety of human services,” said Clay Stevens, President of International Exposition Company, which produces and manages the AHR Expo. “We are delighted that this donation will help make their constituents more comfortable while significantly reducing their energy bill.”

Created in 2002 by ASHRAE, AHRI and AHR Expo, the AHR Expo Innovation Awards competition was designed to recognize the most innovative and useful products among the thousands on display at AHR Expo. Every year, AHR Expo donates the entry fees to not-for-profit organizations in cities where the Expo is being held. Since the Awards’ inception, more than $120,000 has been donated to organizations throughout the US. Many of these organizations have used the donation to enhance their HVAC systems or help train industry technicians.

In January of this year AHR Expo donated over $10,000 to Family Gateway, a Dallas-based organization dedicated to helping homeless children and their families. Named Homeless Services Agency of the Year at the 2012 Help the Homeless Awards, Family Gateway will also use the donation to upgrade outdated and inefficient HVAC equipment in 28 of their family units.