In the rapidly growing Asian market, sales of ultrapure water systems and consumables will exceed $3 billion for the first time ever in 2015. This is the conclusion reached in the McIlvaine on line report Ultrapure Water World Markets. 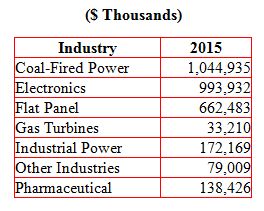 Asia is building more new coal-fired power plants than the rest of the world combined. The majority of these power plants are of the ultrasupercritical design. These power plants need the highest purity boiler feedwater. Contrary to public perception, the Chinese fleet is operating more efficiently than the U.S. counterpart. The reason being that most of the Chinese plants have been built since 2000. By contrast, the average coal-fired power plant in the U.S. is more than forty years old. Asia has been quick to embrace newer technologies such as electrodeionization (EDI) as a substitute for ion exchange.

Asia is proceeding with come nuclear power plants. These power plants require the highest quality water. Combined cycle gas turbine plants also require high quality water but their needs per megawatt are less than half of that of a coal-fired power plant.

Over 50 percent of the market is attributable to the electronics and flat panel segment. Asia has more electronics facilities using ultrapure water than the other continents combined. One of the bigger growth segments in China has been photovoltaic cells for the solar industry. These plants do require ultrapure water although not as pure as required for semiconductor manufacture.

The one application where Asia does not dominate is pharmaceuticals. Water for injection (WFI) needs to be ultrapure because it is mixed with substances which are then injected into humans. The bulk of the manufacturing of pharmaceuticals is still in the U.S. and Europe.

Special instrumentation which can measure dissolved oxygen and other constituents in parts per billion are required in ultrapure water systems. There are a series of filtration steps ending in treatment by reverse osmosis. Even after the water is ultrapure there is a concern about re-contamination in pumps and piping. Consequently, in a semiconductor plant, the water leaving the RO system passes through piping and then into an end point membrane cartridge filter before being used to wash the wafer.