In response to strong customer demand, Armstrong has extended its IVS range of integrated Sensorless control pumps (previously available up to 7.5kW) to include models with variable speed drives up to 55kW. 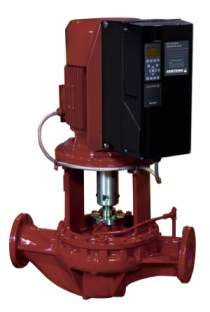 The pumps are Armstrong’s Series 4300 and 4302 models – now a HVAC industry standard – incorporating integrated inverters which automatically calculate the building demand and adjust the speed of the drives accordingly. The extension of the range means that an even wider range of applications can now benefit from the advantages of the IVS pump range, which include, among others: energy efficient variable speed pumping achieved more quickly and easily at lower cost; reduced complexity of system design without the need for remote VFDs and sensors; faster maintenance (even on the largest pump models) with a 50% reduction in seal costs; energy consumption reduced by over 20% compared to maintaining a constant pressure across the pump.

In addition to providing a far more effective alternative to traditional variable speed pumping in new builds, the built-in control of the IVS range has valuable benefits for retrofits, simplifying the migration from fixed to variable speed.

Since its launch in 2001, the integrated Sensorless control of the IVS product range has revolutionised variable speed pumping. The integrated inverter, attached to the body of the pump itself, enables the pump to calculate its own speed requirements based on the load placed upon it at any one time. Embedded within the memory of the speed controller are pump performance curves for differing speeds, including power, pressure and flow data across the flow range of the pump. So, as long as the inverter can identify the power and speed of the pump, it can carry out the necessary calculations to determine the hydraulic performance and position in the pump’s head-flow characteristics. The speed controller then regulates the pump accordingly to ensure that only the required energy for its current base-load is used.

This means the pump is self-contained, capable of operating without a centralised inverter, and without the need for differential pressure sensors within the system. It can be easily linked to a BMS for greater visibility of what is happening, but it does not rely on electronic communication with other elements of the system in order to understand the job it needs to do. It arrives on site with all this intelligence already resident (so it doesn’t require complicated commissioning) and is “plug and play” requiring little or no programming by the user.

IVS Sensorless pumps up to 7.5kW have become a top-selling product line for Armstrong. The latest launch extends the opportunity for integrated Sensorless control for variable speed vertical in-line pumps up to 55kW, meaning that specifiers can offer significantly better energy efficiency performance without the fear of adding to the complexity and cost of the system.

To coincide with the launch of the extended IVS range, Armstrong is also launching a range of standalone inverters, the IVS102, to offer specifiers variable speed pumping up to 450kW maximum power. 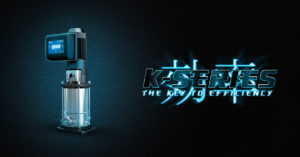