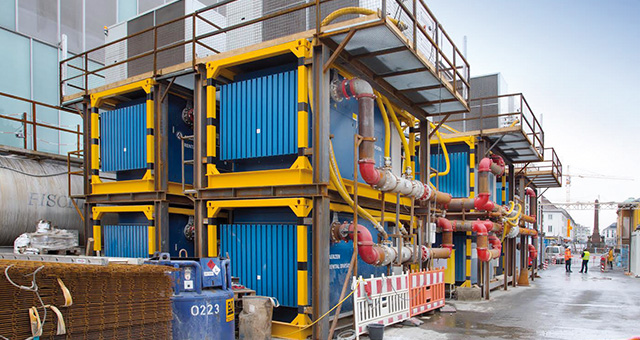 In Karlsruhe, the eight CVO4400 units of Aerzen Rental are combined into two-storey units to save space. (Image source: Aerzener Maschinenfabrik GmbH)

To prevent water penetrating into the construction site, the company Pressluft Frankfurt Drucklufttechnik GmbH relies on our compressor technology.

Anyone who stands on Karl-Fried-rich-Straße in Karlsruhe during a downpour and takes a look at the asphalt will notice a fine-pearled foaming road.  The reason: the tunnel underneath, with its base 15 metres below street level, loses air. “Here, we have to deal with a lot of sand, gravel and loose rock. These are materials which are not useful in tunnel construction,” says Robert Schweitzer, Construction Manager, describing the challenges he faces in the centre of Karlsruhe.  On one side, due to the geological conditions, BeMo Tunnelling GmbH is forced to stabilise the walls by propelling shotcrete at them, as otherwise the ground could behave unpredictably. On the other side, the pores are so large that the ground water would run directly out of the walls if the appropriate counterpressure is not provided on site. This leads to the conclusion that the work is literally under pressure. In the first construction phase, this is at a delta of 0.75 to 0.85 bar to the atmosphere. Therefore, the project is subject to German compressed-air regulations which define the relevant rules regarding job safety. Against this background, nobody is permitted to enter the pressure lock without a special briefing - and must not leave it without decompression taking place.

The pressure sluice supplies data to a control room where the sluice monitor always has an overview of the operating status of all compressors on a display.  Twelve assemblies are installed - four underground and eight on the road directly above. The spatial division is due to the fact that soil analyses undertaken at the beginning of the tunnel project suggested a higher degree of impermeability. This assessment subsequently proved incorrect and thus the flow capacity which had been calculated for the compressors did not apply either. “Making forecasts for old riverbeds is almost impossible.” We simply do not know what to expect”, says Peter Engelke, project manager of Pressluft Frankfurt. The company received an order from BeMo to design the compressed air according to the initial soil analysis in the Rhine plain.

As it soon became clear that the calculated performance would not be sufficient, Pressluft Frankfurt and Aerzen Rental started looking for an efficient solution that would be quickly available. “The cooperation between all three companies is quite flexible and very professional”, emphasises Engelke.

“We have integrated the compressors with Delta Screw packages (VM 60, 1.140 to 4.550 m³/h, 45 to 250 kW) as core within container frames. These can be easily transported, combined to form space-saving units on site and, thanks to the cartridge design, can also be stacked on top of each other,” explains Peter Link who is responsible for the German rental business. The headquarters of Aerzen Rental is at Duiven in the Netherlands. In Karlsruhe, the compressors type CVO4400 are combined with water coolers which cool down the air outlet temperature of the compressor from 120°C to 20°C.

During the not so deep work, the assemblies pump 100 to 140 cubic metres of air per minute into the tunnel on a daily average. This also explains the foaming road when it rains. The deeper the site is, the more the pressure increases from the groundwater. Robert Schweitzer expects a pressure delta of up to 1.3 bar by the end of the structural work. Therefore, the pressure losses will increase exponentially and a higher volume flow will be required. For this reason, and according to the compressed air regulations after sufficient redundancy, the equipment supplied by Aerzen Rental covers adequate reserves. “We have to cover the complete demand by two thirds of the installed machine performance. Four of the twelve assemblies serve as spare machines”, explains the mechanical engineer. “The specific performance of the assemblies is unrivalled,” emphasises Engelke, describing the start of cooperation between AERZEN and Pressluft Frankfurt more than 30 years ago. “In all these years, I have never had a broken machine - this signifies long working life and reliability.”

In Karlsruhe, the speed of the compressors is adjusted so that their actual performance corresponds exactly with the pressure losses from the tunnel - these measure 15,000 cubic metres from Marktplatz to Ettlinger Tor. In addition, it is economical for BeMo Tunnelling and Pressluft Frankfurt to rent these compressor packages in such special application cases, instead of buying them. And the independent Aerzen Rental service takes care of all the maintenance during the time that the equipment is in operation. 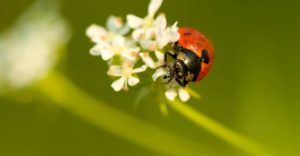 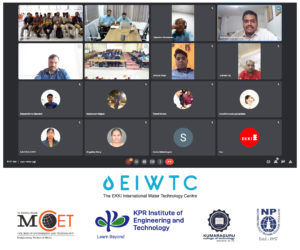 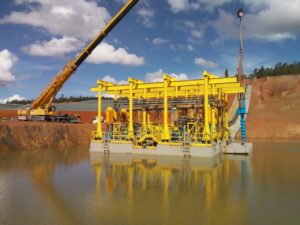 Water is present everywhere in mining and its control varies according to its role in the mining processes. This in turn influences the selection of technologies used in pumping water. Alongside the safe supply and recovery of process water is the challenge of removing ground water. 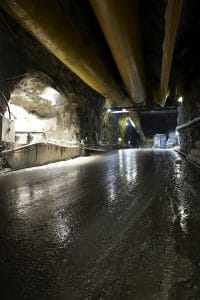 Keeping the Water Where you Want it in Tunnel Construction

Pablo Garcia, Global Business Development Manager at Sulzer, looks at the range of pumps needed throughout a tunneling project and the support structure needed to keep them operational.