Wilo AG is one of the leading international suppliers of pumps and pump systems and can look back on another successful fiscal year in 2004: The worldwide group turnover increased by 7.2 per cent from 616.6 million to 660.8 million Euros. 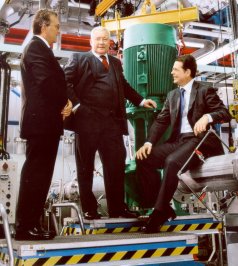 "In the past few years, we have increasingly become an international company, but our roots remain firmly planted in Dortmund, where we first started our operations" said Wilo's CEO Dr. Horst D. Elsner. "'German engineering', which is still highly regarded in other countries, is part of our identity." Since 2005, Wilo has been operating all over the world with the German motto "Pumpen Intelligenz".

In 2004, the group employed a total of 3,942 persons, 2 per cent more than in the previous year. In Germany, the group has 1,614 employees, of which 931 work at the group headquarters in Dortmund. Wilo places great emphasis on trade training: 68 trainees were employed at the two German locations in Dortmund and Oschersleben in 2004. All trainees who finished their courses this year were guaranteed jobs in the company for at least one year. Wilo also supports training activities outside the company: in the plumbing and heating sector, the most important customer group of the pump manufacturer, Wilo again awarded prizes to talented trainees, just as in the preceding years.

The prospects for 2005 are generally positive. "In Europe, we expect a medium increase in turnover, with the greatest rates again in Eastern Europe" said Elsner. "The continuing extreme weakness of the German building sector means that we cannot expect increases in the pump market at home. In Asia, particularly in China, the turnover expectations are generally positive, although we must expect a drop in the regions hit by the tsunami at the end of last year" At the beginning of this year, Wilo initiated a strategic re-orientation in the North-American market: EMU waste-water pumps are now being marketed by a newly founded company instead of by an importer, as was the case in the past. In addition, two companies, one in Canada and one in the USA, have been founded for the marketing of pumps in the sector of building technology. All of these activities are bundled under the control of Wilo Nordamerika GmbH. With its headquarters in Dortmund. Dr. Thomas Schweisfurth, Executive Board Member, said: "For us, this commitment in North America is an investment in the future and a further step towards the worldwide presence of the Wilo brand.“

A combination of strong market demand and global expansion at Watson-Marlow Fluid Technology Group (WMFTG) has resulted in significant investments in manufacturing capacity for several of the Group’s businesses.

In the financial year 2020, the Wilo Group has managed to achieve a currency-adjusted sales growth of 1.8 percent despite the difficult conditions caused by the pandemic and the economy. Sales revenues amounted to approx. 1.5 billion euros.