By early June, 6 months before the show opens, 75% of the stand space had already been booked. In particular, there has been increasing interest in the show’s themed villages - Health and Environment, Recycling, Renewables - and a very promising start for the new Products and Sustainable Development space.

Another feature has been the strong showing made by the joint venture stands, especially the regional ones (8% increase in area compared with 2003), which bodes well for the presence of numerous innovative SMEs at the show.

For the first time, Pollutec, with the regional government and the Ile-de-France DRIRE, in partnership with the Regional Development Agency (ARD) and the Versailles Val d’Oise/Yvelines Chamber of Commerce and Industry, will be staging a major Eco-activity Business Convention for companies from the region active in the environment.

With 50,000 jobs, Euro 15 billion of sales (representing 50% of national sales and 8% of European ones) and some 3,000 companies, the environment business is a major field of activity in Ile-de-France, involving both world leaders, specialist SMEs, and research centres offering a very wide range of expertise in the fields of water (Ile-de-France is a global centre of excellence in this field), waste, air, as well as renewables, soil and noise.

The aim of this first convention, which is taking place during the four days of the show, is to boost the entire industry by encouraging contacts between customers planning investment projects (SMEs, major industrial groups, local authorities…) and Ile-de-France eco manufacturers offering solutions.

In terms of suppliers, the focus will be on two core targets: young, innovative companies from the region and Ile-de-France exhibitors at the show (around 250 companies). Customers – whether French or foreign, forming part of previously announced official delegations – will be selected on the basis of the relevance of their investment or partnership plans. The organizers have set a target of 500 business meetings.

As of the beginning of June, 11 countries had announced that they would be organizing major national stands (1,500 m2 in total) involving institutions, research organizations, SMEs…:

Naturally, the regions of France will also be present in force. As of the beginning of June, 12 regions or departments had already booked a total of around 2,200 m2 :

Developments in regulations, benefits of new techniques, case studies - as always, Pollutec will provide an opportunity to survey developments in the world of the environment through the conferences organized by the trade organizations and associations in the sector. As of the beginning of June 3, conferences aimed at an international audience had already been announced :

Combination of anaerobic treatment and aero-flotation

The full programme is available on the Pollutec website.

Numerous discussions (in French) devoted to topical subjects will also be open to visitors in the new spaces or themed forums at the show. Topics to be covered include:

In the Environment, Risks and Health Forum, co-ordinated and organized by INERIS (Industrial Environment and Risks Institute) in partnership with the IRSN (Institute for Radioprotection and Nuclear Safety): chemical substances and the REACH protocol (regulatory aspect and results of the pilots trials in progress), substitute materials, fine particles, nanotechnologies, the Waste and Soil framework directives, the Water framework directive and its integrated, overall approach.

Pollutec will also provide an opportunity to highlight groundbreaking initiatives in the field of the environment and sustainable development through the various prizes and awards. 5 awards ceremonies have already been announced for the show.

Organized by ADEME, in partnership with the magazine Industrie et Technologies, these Awards are for industrial or commercial enterprises that have introduced innovative industrial production equipment or processes for their own internal requirements in order to reduce primary energy consumption and/or pollution. Six companies – including 3 SMEs – will receive Awards in 2005.

Businesses and the Environment Awards

These Awards, sponsored by the French Ministry of the Environment and Sustainable Development and organized by the Assembly of French Chambers of Commerce and Industry (ACFCI), comprise two categories:

The best entries will be forwarded to the European Commission and will be entered for the European Business Awards for the Environment.

Innovative Techniques for the Environment Awards

Energy saving, Renewables, Air, Noise, Soil decontamination, Analysis/measurement/monitoring of pollutants, Recycling/Exploitation, Waste, Water: public research laboratories working in these fields who want to collaborate with industry are invited to enter their research projects for the Research-Industry Meetings 2005 organized by ADEME and Pollutec, with the support of the ministries responsible for Industry and Research.

The best projects in terms of their scientific and technological interest will be chosen for the Innovative Techniques for the Environment Awards by the press partners of the initiative and will be displayed in the show’s Research-Industry Space.

In order to be eligible, the innovations must be presented by European companies and have been launched after 1st January 2003. They will be judged on the basis of 4 criteria: innovation and degree of improvement; environmental problem and European significance; cost, quality and reliability; originality. Following national shortlisting (in May), a European jury – made up of members of the EEP and the EFAEP – will select 10 European finalists in September, before announcing the 3 winners at the show. The winners will benefit from media coverage in EEP publications and on its web site.

Additional information can be found at:

Organized by ADEME and Pollutec for the second time, these Awards provide recognition for exhibitors at the show who have adopted a comprehensive environmentally friendly approach to the design of their stands. The selection criteria will include: the choice of recyclable or re-usable materials and coverings, the implementation of multi-material waste collection, the reduction of electricity consumption, particularly for stand lighting, the reduction of waste production … The jury will examine the competing stands during the show and will also take into account efforts made to improve the environmental characteristics of information material, to reduce the distribution of printed literature and the quantities of waste.

The Economy: Recovery, Recycling and Exploitation

FEDEREC (the French Federation of Recovery and Recycling) has recently released the 2004 results for the French recovery, recycling and exploitation markets to the press. Here is a brief summary.

This advance was largely due to the very strong growth in value terms of scrap metal and cars, which accounted for 34% of total sales by value in 2004 compared with 25% in 2003. Exports continued to grow (+8% to 8.2 million tonnes), whilst the level of investment remained steady at Euro 350 million.

Growth, however, varied widely between the different channels. Some grew very sharply in value terms. This was the case for scrap metal and cars, which surged ahead by 70% on the back of spiralling ferrous metal prices, along with non-ferrous metals (+ 20%), plastics (+9%) as well as palettes and ordinary industrial waste (+7%). Other areas stagnated (+ 1% for glass, -1% for textiles), whilst paper and board suffered a slight fall (3%).

For 2005 growth looks as if it will be more restrained. In the first quarter, although raw materials prices continued to increase, sales by the recycling and recovery industry only registered moderate growth (+2 %) as Chinese demand ran out of steam and national output dropped. Rising demand in the United States, Japan and Russia might, however, change the situation in the course of the year. 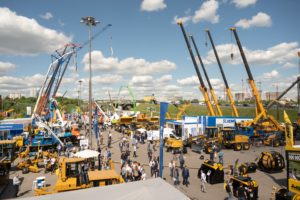 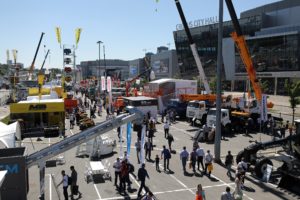 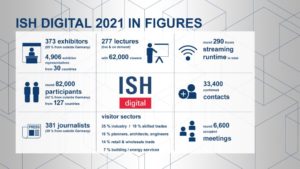 From the very beginning, the focus of the world’s leading trade fair for HVAC and water was on networking, knowledge transfer, high-grade content, an extensive programme of events and the numerous solutions and innovative products of the 373 companies taking part.