Currently, San Enrique and its shareholders face injunctions imposed by two of its joint venture partners (“JV”) on its Tierra del Fuego Concessions (“TDF”), which have taken issue upon certain aspects of their rights under the terms of the JV agreement held between several participant companies in the TDF concessions related to rights of first refusal (“ROFR”) over San Enrique’s interests in TDF. Pluris Energy commenced an arbitral action through the International Chamber of Commerce in Paris, France related to protecting its rights under the terms of the Share Purchase Agreement (“SPA”) entered into between Pluris Energy and San Enrique on August 18, 2006.

Pluris Energy’s Chairman & CEO, Mr. Sacha H. Spindler stated, “Although completion of the San Enrique acquisition has been delayed through injunctions imposed regarding San Enrique’s Tierra del Fuego interests, we’re taking the necessary steps to ensure that Pluris Energy’s rights and interests in the acquisition of San Enrique are protected and that resolutions related to the issues at hand can be made in a time frame that fits within our scheduled South American acquisition and development objectives.”

TDF represents one of five assets owned by San Enrique, where it controls a 12.62% non-operated working interest in producing fields with considerable development and exploration potential. TDF produced approximately 11 Mmcfgd at the time Pluris Energy and San Enrique entered into the SPA. Since then, TDF has been subject to a drilling program that resulted in 16 successful new well drills and corresponding production increases to approximately 19 Mmcfgd by the end of 2006. Some productive wells remain shut-in due to production capacity constraints, however, investments in new gas processing facilities and installation of additional pipelines are currently being undertaken to raise production capacity and allow for shut-in wells to be connected to the sales line. The added infrastructure is scheduled to increase total gas deliverability to 35 to 40 Mmcfgd by the fall of this year. Additionally, drilling activity is scheduled to resume this quarter with a drilling program that could see as many as 10 new well drills completed during 2007. A 309 square kilometer 3D seismic program was completed at TDF in early 2007 to allow for further delineation of the geologic characteristics of the area and to facilitate future upcoming drilling campaigns.

Mr. Spindler added, “The current development program being undertaken on the Tierra del Fuego concessions confirms the substantial opportunity foreseen by management in acquiring San Enrique as Pluris’ entry for growth in the burgeoning Argentine energy sector. The San Enrique assets are developing consistent with our initial understanding of their ongoing value proposition. That development which we’re now seeing was anticipated as the means to monetize and expand Pluris’ focused efforts related to repositioning the Company’s business development mandate and restructuring the corporation to achieve completion of a key entry point acquisition in South America such as San Enrique. In a short period of time, we are very pleased to have provided our shareholders with the opportunity to become a key committed player in the South American hydrocarbon arena. Particularly, we are excited at the prospect of adding high-value assets for our shareholders, as those through the San Enrique acquisition and several other opportunities under review.”

Notwithstanding the Company’s efforts to close on the San Enrique acquisition, Pluris Energy continues to be focused in its commitment to target and capture various acquisition opportunities in Argentina and other regions of South America. Currently, the Company is assessing several traditional oil and gas opportunities which include farm-ins, competitively bid and negotiated transactions. In addition, the Company is in the process of evaluating economically-attractive new alternative energy opportunities, the combination of which fit within the mandate of the Company’s business objectives. Management of the Company looks forward to communicate further developments in this regard in the very near future.

Mr. Spindler concluded by stating, “We look forward to making upcoming announcements about the status of the San Enrique acquisition, our progress related to new acquisition opportunities and funding resources in place to complete acquisitions in Argentina and other regions of South America. We want to thank our shareholders for their patience and support as we continue to work toward fulfillment of the Company’s plans and objectives.”

Pluris Energy Group Inc. is an international energy company engaged in the acquisition and development of producing oil and gas interests and new alternative energy opportunities aimed to diversify the worldwide energy grid. For further information, please visit the Company’s website at www.pluris.com 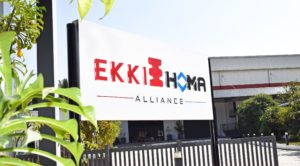 EKKI HOMA Pvt Ltd, the International Joint Venture Alliance established in 2018 between the EKKI Group of India and HOMA Group of Germany has won the Emerging Company Award from Indian Achievers’ Forum (IAF).