At IFAT 2002, to be held in Munich from 13 to 18 May, KSB Fluid Systems GmbH, Frankenthal, will present a completely new type of drainage station. Its defining characteristic is the fully integrated design, with the discharge line, check valve and pump house forming a single unit. Thanks to the new design, tubular casing pumps no longer need an discharge elbow. This significantly reduces the head losses otherwise incurred. 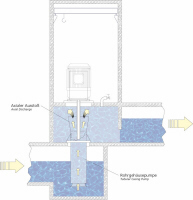 The station's very compact design additionally means savings in space, installation time and, therefore, in capital expenditure. It is also cheaper to run and maintain than traditional pumping stations with a free overflow, because only the head itself needs to be attained, without the elbow resistance having to be overcome as well. And since there is no discharge line, corrosion caused by aggressive water is a thing of the past.

The system is designed for those applications where large amounts of water, for example from a river, lake or the sea, have to be pumped to a low altitude. For example for irrigating farm land, in flood control applications and for supplying water to seawater desalination plants and power stations.

After switching on the pump, the downstream piping fills up with water, causing the air in the system to escape through the vent situated above water. Venting complete, the siphoning effect sets in.

Switching the pump off causes the fluid to return from the above-water to the below-water basin. In future, many stations can do without a separate vent valve because of the special design of the system; the reverse flow of fluid causes the siphoning effect to be interrupted. As the system has an integrated siphon, there is no need for a separate check valve.

Safe delivery of aerosols with side channel pumps

The self-priming side channel pumps SEMA-S from SERO PumpSystems are used for the safe and efficient delivery of aerosols.

In the cosmetics sector, ViscoTec barrel extraction solutions are often used to feed highly viscous products such as mascara to filling stations. While the emptying and dosing systems can be easily disassembled for cleaning, this does not apply to the hoses in use.

Düsseldorf-based pump manufacturer Tsurumi has designed its new GPN 837 submersible motor pump especially for pumping heavy wastewater. The unit is the new top model in the series. Compared to the strongest model to date, the GPN 622, Tsurumi has been able to almost double the water output, to 9,000 litres per minute.