Mouvex, a manufacturer of positive displacement pumps, vane compressors, screw compressors and hydraulic coolers, announce the launch of its SLS4 and SLS8 models of its Seal-less drive Eccentric Pumps. 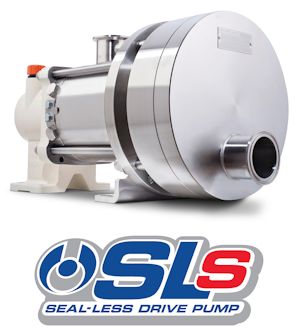 These pumps have been designed for use in a wide array of pumping applications in the food, cosmetic and pharmaceutical industries, all of which require extremely hygienic operations.

The major technological advancement in the SLS4 and SLS8 pumps is the incorporation of a double-wall bellows into the design, along with monitoring that is done by pressure switch. By mounting the pressure switch on the bellows flange, the bellows becomes an independent sub-assembly within the pump, making for safer and easier operation. This design has helped the pumps earn the ability to be used in hygienic applications from a number of regulating agencies, including EHEDG, 3A, FDA and the new European Commission (EC) Regulation No. 1935/2004, which applies to all food-contact materials during production.

Other improvements in the SLS4 and SLS8 pumps includes the ability to handle differential pressures up to 10 bar (145 psi) in the SLC4 and 6 bar (87 psi) in the SLC8, and high-quality machined parts for optimum surface finish, which are also compatible with SMS, DIN11851, DIN11864 and ASME-BPE clamp flanges.

Along with these advancements, the SLS4 and SLS8 pumps offer the features that Mouvex eccentric disc pumps are noted for, including:

The introduction of the innovative SLS4 and SLS8 pump is the latest step in Mouvex’s replacement of its C-Series line, which was introduced in 1996. Already, the SLS1, SLS2 and SLS3 models have been introduced to the food, cosmetic and pharmaceutical markets, with the availability of the SLS12, SLS18, SLS24 and SLS36 models expected in 2014.