The crude oil production site at the Tempa Rossa oil field in Corleto Perticara, in the Basilicata region of southern Italy, will use GE’s advanced evaporator and zero liquid discharge (ZLD) technology to recycle up to 98 percent of produced water.

Total E&P Italia S.p.A. has six wells in the Tempa Rossa oil field, and GE will provide the technology to engineering, procurement and construction (EPC) contractor Maire Tecnimont S.p.A, which is overseeing the development of the project for Total E&P Italia.

As one of the most important oil fields in Italy, the Tempa Rossa project, along with the nearby Val d’Agri oil field, will create enough oil to meet approximately 10 percent of Italian oil needs.

The execution of the work will comply with the most severe requirements in terms of health, safety and environment for a facility of this nature in Italy. The Tempa Rossa oil field needed an innovative and energy-efficient solution to treat the water and meet stringent discharge regulations, and GE’s technology was deemed the best technology for recycling water at this facility.

The project marks the first application of GE-produced water treatment in Europe, leveraging on GE’s wide experience in produced water treatment in Canada, the United States and Australia. When producing crude oil, the water that is pumped as a byproduct is called produced water. Oil wells can produce enormous quantities of water, and this produced water needs to be treated or hauled away from the site. At the Tempa Rossa oil field, GE’s ZLD crystallizers will demineralize the produced water, which will be available for firefighting. The remaining brine will be concentrated into solid salt crystals for disposal. The ZLD technology will enable Maire Tecnimont SpA to meet new national environmental regulations governing water discharge.

Italy had become increasingly dependent on oil and natural gas imports. New oil fields, such as Tempa Rossa, will enable Italy to become less reliant on imports, improving the export/import commercial balance. Once fully operational in 2016, Total E&P Italia’s six wells in Tempa Rossa will have a daily production capacity of approximately 50,000 barrels of crude oil, 230,000 m³ of natural gas, 240 tons of liquefied petroleum gas (LPG) and 80 tons of sulfur.

GE will provide two identical produced water treatment units including de-oiling, forced circulation brine concentration, evaporation and crystallization for ZLD. It is a complex process in which GE’s multiple-effect steam-driven units will be used for concentration and crystallization. Vapors generated during the evaporation process are condensed in GE energy air condensers and air coolers to meet the required temperature for demineralized water production and firefighting reuse.

The energy-efficient technology will treat up to 52 m3/h of feed water per line and will be able to recover up to 98 percent of produced water as distillate and solids. The delivery is expected to be completed by the first quarter of 2015 with installation by the third quarter of 2015.

“Marie Tecnimont’s technical expertise and know-how in similar projects around the world was crucial for the development of this project. We’re pleased that our innovative water treatment technologies will be used to recycle its produced water, enabling compliance with strict water reuse regulations and a reduction in operational costs associated with water consumption,” said Yuvbir Singh, general manager, engineered systems—water and process technologies for GE Power & Water. “Once Maire Tecnimont installs the GE evaporation technology for the Tempa Rossa oil field, it will represent the first application of our produced water treatment in Europe.”

The entire scope of the project includes the Tempa Rossa oil field development project, as well as the central process facilities of the oil center where the crude oil is treated, along with the treatment of the associated gas and water, the LPG storage center, the surface facilities on the well pads and the connections of the flowlines and pipelines with Snam Rete Gas and with Taranto Refinery pipeline. 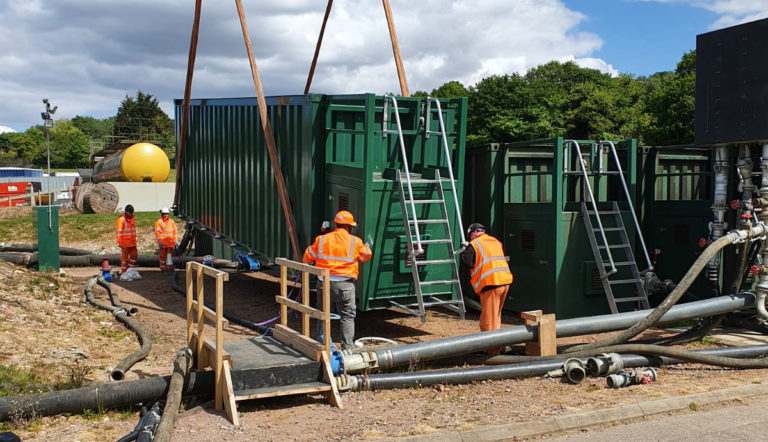 Technology from onsite wastewater treatment specialist WPL has been selected by Anglian Water to deliver enhanced ammonia removal at a major works.