Global demand for HVAC equipment is forecast to increase 5.7 percent annually to $120 billion in 2018. Growth will be driven by an expansion of reliable energy sources and increases in income levels in China, India, and other developing countries, making HVAC equipment more accessible to a larger number of consumers. 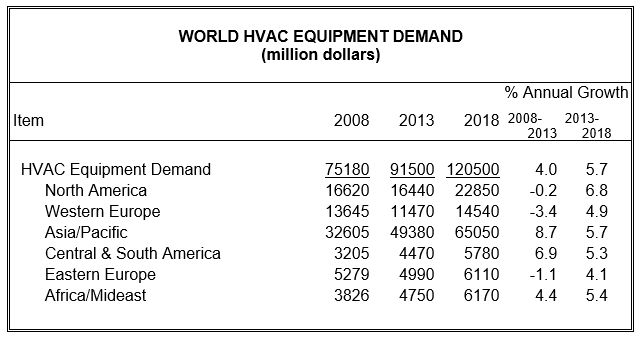 A recovery in the housing markets in the US and Western Europe, along with rebounding consumer confidence levels, will also support sales gains. According to analyst Pamela Safarek, “Additional demand will result from retrofits as older inefficient HVAC equipment is switched out for new high efficiency models.” These and other trends are presented in World HVAC Equipment, a new study from The Freedonia Group, Inc., a Cleveland-based market research firm.

The Asia/Pacific region was the largest market for HVAC equipment in 2013, with 54 percent of the global total. Growth will be driven in large part by China, which will account for one-third of world sales in 2018. India and Indonesia, however, will record the fastest growth worldwide. Rapid economic growth, as well as an expansion in electrification and greater product availability, has spurred demand for goods such as air conditioners in these and other developing Asian countries, and will continue to do so through the forecast period. Limiting further growth in the Asia/Pacific region is the highly developed nature of the markets in Australia, Japan, and South Korea. These countries have relatively high market penetration rates of HVAC equipment, so sales growth will be primarily influenced by weather patterns, as well as by building construction levels and replacement activity.

On a regional basis, North America is projected to achieve the most rapid gains through 2018, with HVAC equipment sales forecast to increase 6.8 percent per year from a low 2013 base. The US, which accounts for the largest share of North American demand, was adversely affected in recent years by the 2007-2009 recession and subsequent slow recovery. This caused consumers to postpone purchases -- either to replace an existing version or to add new equipment -- and to repair used equipment when possible. Sales growth will stem primarily from a release of this pent up demand. Rebounding housing activity will also contribute to gains, as HVAC equipment is commonly installed when a new house is built or an existing house is sold. 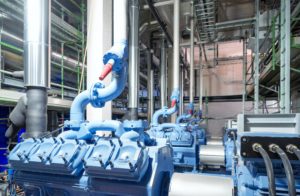