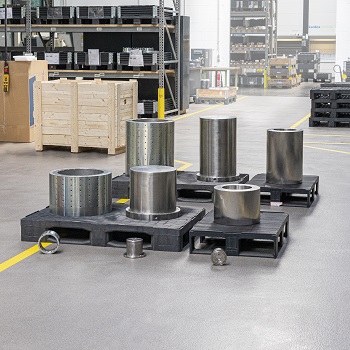 For a Chinese customer, DST produced its biggest and heaviest magnetic coupling as well as the biggest double wall canister so far. Installed in an overhead agitator drive, the product is used in the chemical industry.

The torque of the magnetic coupling is approximately 15,000 Nm at 20°C. The corresponding double wall canister is designed for a working pressure of 16 bar. The canister also has provisions to monitor the operation giving the customer a safe and realiable operation run. The total weight of the shipment was more than two tons.

The magentic coupling was designed using standard guidelines and was checked for feasibility using latest simulations software. Among others, torque, eddy current losses and stiffness simulations for various load conditions have been made. By now, DST has more than 1,000 different magnet configurations. 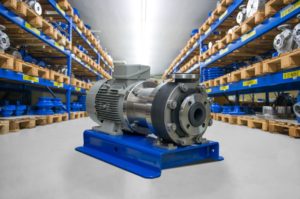 The MSKP pump type is one of three sealless, magnetically coupled pumps from CP pump systems PTFE and PVDF full-polymeric range. Just like all CP pumps, the all-polymeric pumps are designed for demanding pumping tasks and high requirements of the chemical and numerous other industries.