TI Automotive is introducing an all-new, dual-channel, single-stage (DCSS) line of fuel pumps that the company predicts will set a new industry standard for efficiency.

Developed by a TI Automotive research and development team in the United States, the turbine pump is the first, cost-efficient fuel pump designed to meet the high-fuel-pressure requirements of direct-injection engines, according to David Ford, TI Automotive’s director of advanced fuel delivery and application engineering.

“The DCSS pump will enable automakers to increase fuel efficiency, reduce emissions and improve the overall performance of future gasoline engines,” Ford said. “Within the next six years, we expect this new design to replace a majority of the fuel pumps that we produce on a global basis.”

In addition to more conventional applications, the new pump is suited for use with saddle-style fuel tanks found on many high-performance vehicles.

With development, tooling and facilities costs of more than $16 million over the last two years, the new pumps will be produced at TI Automotive manufacturing facilities in Neuss, Germany, and Caro, Mich.

“The DCSS pump is engineered to provide automakers with improved efficiency, higher fuel pressures and increased pump life,” Ford added. “Our new pump offers the most significant gain in pump efficiency in years. It operates at efficiency levels of up to 30 percent, nearly 50 percent higher than the typical 20 percent efficiency of today’s turbine pumps.”

“The end result effectively doubles the flow of fuel through the pump,” Ford explained. “Innovation and technology development, as demonstrated by these new products, form the core of our company’s strategy for future growth.”

For high-flow/high-pressure requirements, the DCSS 39/50 pump uses a 50-mm pump housing coupled with a proven 39-mm motor used for the company’s present, single-stage T-8 family of pumps. “Since we already had a reliable pump motor, we were able to shave a considerable amount of DCSS development time,” Ford noted.

Designers concentrated on creating a larger, 50-mm inlet housing and a larger impeller to make room for a unique second row of turbine blades. The patent-pending, dual high-pressure design maintains velocity in the fuel channel by splitting the inner and outer flow paths.

The unique pumping sections were designed in parallel, not in series as in other two-stage pump designs, and the impeller was engineered with unique curved-leaning blades, both of which help to reduce fuel turbulence and increase pump output.

“Present single-stage turbines only give you a maximum pressure of about 5 bar and flow rates of 180 liters per hour,” Ford explained. “That’s far short of the fluid pressures and volume needed for advanced direct-injection engines.”

The DCSS 39/50 produces flow rates of 200 to 240 liters per hour at pressures ranging from 4 to 6 bar and easily meets direct-injection performance criteria.

In critical “hot fuel” tests, the DCSS 39/50 also significantly outscored its competitors. Other single-stage turbine pumps show flow losses ranging from 12 percent to 32 percent at operating temperatures up to 67 degrees C (153 F). The DCSS 39/50 showed only an eight percent drop in flow under identical test conditions.

“Heat is also critical in direct-injection engines,” Ford noted. “Not only do we need to deliver a cooler fuel, but engine-mounted, direct-injection pumps hold high tolerances, and if they are exposed to high temperatures, the varying coefficients of thermal expansion in the pump material can create lockup.”

The benefit of increasing output without increasing motor size also provides much greater durability. “Because the TI 39/50 provides increased fuel flow, we can reduce the speed (revolutions per minute) of the pump motor. That reduces motor brush wear and significantly extends the life of the motor,” Ford added.

In durability tests, the DCSS 39/50 exceeded 10,000 hours of continuous operation, more than double the typical automaker requirement of 5,000 hours.

TI Automotive is the world’s leading supplier of fluid storage, transfer and delivery systems including brake, fuel and air conditioning applications. Based in Warren, Michigan, the company employs over 20,000 people at more than 130 facilities in 29 countries on six continents. 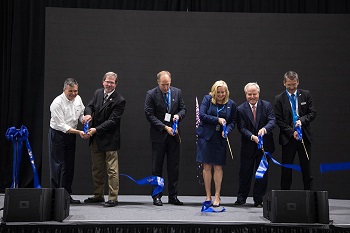