Peter Wurzbacher, Member of the Board of Management of KSB Aktiengesellschaft, has left the company by mutual consent. 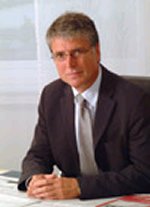 His responsibilities have been taken over by Chairman of the Board of Management Josef Gerstner (Sales and Region Asia / Pacific) and Member of the Board Dr. Willi Enderle (Service) in addition to their current functions.

Peter Wurzbacher, who was named member of the Board of Management of KSB Aktiengesellschaft in 1998, joined the company as early as in 1970. He had held various positions in the Group ever since. His responsibilities included Sales, Marketing and Service. He was also in charge of the Region Asia / Pacific, as well as the Competence Centres in Europe.

Josef Gerstner joined KSB Aktiengesellschaft in 1996 as Chairman of the Board of Management. He is responsible for Product Management of pumps and valves, Production Europe, as well as for the Group functions of Communications, Human Resources, Corporate Development, Internal Audits and Global Manufacturing Network.

Dr. Willi Enderle joined the Board of Management of KSB Aktiengesellschaft in early 2001. He is responsible for worldwide Research, Development and Engineering of the pumps and valves, as well as for Automation and Drives, Quality Management, Environmental Protection and Materials Technology. His responsibilities also cover KSB Fluid Systems GmbH operations and the Region Eastern Europe / Africa / Middle East.

After more than 25 years at Mitsubishi Corporation, Hirohide Gohda continues his career with pump company Svanehøj, where he has been appointed as director and head of office in Kobe, Japan.

Seepex is pleased to announce the promotion of Chris Karasch to National Sales Manager. Chris joined Seepex over 12 years ago as a Territory Manager and has gained valuable insight into the progressive cavity market.

After more than 25 years as head of the Institute of Hydraulic Fluidmachinery (Graz University of Technology), Helmut Jaberg retired at the end of the summer semester 2020 and is now professor emeritus.