From 12 to 15 April 2005 the second AchemAmerica 2005 – International Exhibition on Process Technologies - took place in the excellent facilities of the World Trade Center in Mexico City. For four days 150 exhibitors from 20 different countries presented equipment, technologies ... 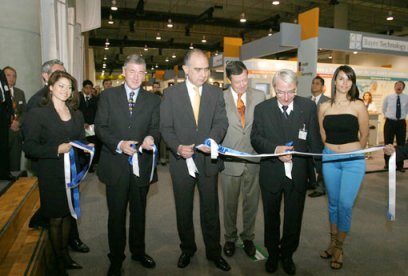 ...and know-how for the chemical, petrochemical and pharmaceutical industries and related branches of the process industries on 1,989 m² of net exhibition space.

After the promising première of AchemAmerica in 2002 with 212 exhibitors and 5531 visitors the second AchemAmerica experienced a drop in the number of exhibitors. However, this was almost solely due to a decline in participants from the USA (minus 44) and Mexico (minus 22), caused by the unfavourable economic climate. At the same time the number of countries represented rose by 25% from 16 to 20. With a total of 5154 professionals who visited the event the number of participants maintained an encouragingly stable level.

At the formal opening ceremony in the presence of high-ranking representatives from industry and politics, Mexico’s Minister for the Economy, Fernando Jesús Canales Clariond, emphasized the significance of AchemAmerica for Mexico as the largest international event in the field of process engineering and equipment for the chemical industry. The Minister stated that it was the declared objective of the Mexican government to pursue sustainable development in the chemical and petrochemical industries and to give high priority to state-of-the-art technologies, the efficient use of resources, economic profitability and environmental protection.

"In order to be a competitive global player, Mexico must be able to supply more sophisticated products, and this requires huge investments and technology transfer", stated Minister Canales. The Chairman of DECHEMA, Dr. Alfred Oberholz, stressed that this event, organized by DECHEMA under its ACHEMA Worldwide concept, provides a large gamut of possibilities for new contacts and for the consolidation of existing business relationships. He stated that the exhibitors had come to Mexico with the express purpose of strengthening cooperation with Mexico. The name of the game is: innovation through cooperation.

The professional quality of the visitors was estimated by the majority to be very good. The highest number of visitors came from Mexico, some 10% from abroad, predominantly from Latin America (Venezuela, Brazil, Columbia) and Europe.

A spirit of optimism prevailed

The exhibitors at AchemAmerica were cautiously optimistic about the outcome of the event for them and the new contacts they had made. Their satisfaction spanned a wide range, from very good to unsatisfactory. The complete picture will take a few weeks, if not months, to ascertain. Numerous experts with a good knowledge of the branch, who were exhibitors in Frankfurt am Main, Beijing and in Mexico City in the framework of the ACHEMA Worldwide concept, stated that patience is necessary, the market simply moves at a different pace; moreover a second event in Mexico cannot be compared with the mega event of ACHEMA in Frankfurt am Main or with AchemAsia which was launched in 1989 in Beijing in the booming land of China. They considered that, in the long term, the positive prospects prevail in a stable, sound economic climate.

“Mexico’s potential is tremendous, but not sufficiently exploited“, said the President of the Mexican Association of the Chemical Industry at the opening ceremony. "The fact that reforms for the energy sector are still pending has caused many investments to veer to other sectors. Mexico's production of chemical products has dropped 20% over the last ten years. In order not to fall behind, we need international cooperation", he stressed. AchemAmerica, with its exhibition and congress, highlighting topics such as "Petrochemistry" and "Water", provides an outstanding platform.

Mexican experts from industry and chemical industry associations were extremely open in their assessment of the current economic situation in Mexico. The government has placed far-reaching strategic goals and visions on its agenda: by 2025 Mexico intends to expand its oil production and to extend the value chain in the country itself. Current impediments are considered to be the backlog of overdue reforms in the energy and petroleum industries and the lack of financing options needed for an economic upturn. Nevertheless, numerous international companies, including over 900 German companies, many small and medium-sized equipment firms and also all the large chemical corporations, view the prospects of their presence in Mexico as excellent. In the long term there are already positive signs of the expansion of international cooperation.

AchemAmerica 2005 Conference as the bridge for new co-operations

The Conference programme with the key themes of “Water and Waste Water Management” and “Novel Processes for Refining, SynFuels and Petrochemicals” featured more than 70 lectures, including five distinguished plenary lectures. It took place in the presence of leading personalities from Mexico’s process industry and was undoubtedly a resounding success. Interest in the Congress increased significantly compared with the AchemAmerica Congress in 2002. Around 200 Congress participants from 24 different countries attended the lecture programme. This exchange of ideas and experience and also the numerous presentations by exhibitors will provide a basis for new contacts.

The ACHEMA Committee together with important representatives of the exhibiting branches will decide on the future orientation of commitment in Mexico.

Mexico is backing its chemical and petrochemical industries

In 2003 foreign direct investments in Mexico amounted to US$ 10.7 thousand million (bn), making it the most attractive location for investments in Latin America. Moreover worldwide Mexico ranked among the leaders, e.g. of the developing countries Mexico came third after PR China (US$ 57 bn) and Hong Kong (US$ 14 bn). For 2004 the Mexican Ministry for the Economy anticipates a rise in foreign direct investments to US$ 15.6 bn. Economic institutes estimate that between 1994 and 2003 US$ 142.5 bn poured into Mexico. In 2005 average industrial growth of around 4% is expected, the highest increases of 6.5% being targeted by the chemical, petrochemical and rubber industries.

According to forecasts of the Mexican Chemical Industry Association, ANIQ, investments by the chemical branch are expected to total US$ 1 bn. This would mean a 20 per cent increase over 2004. ANIQ reports that at least 60 of its 206 members are known to have concrete investment plans. The targeted production growth is a leap from US$ 12.5 bn in 2004 to US$ 14 bn.

Production plants are set to expand in the areas of adhesives, plastics and preliminary products. This mainly involves European, US-American and Mexican companies.

During the year 2004, foreign direct investment in the chemical sector amounted to 1.9 US$ bn. The state-owned oil company PEMEX has plans for huge investments, especially in the fields of petrochemistry and refining. The FÉNIX petrochemical project alone, for which all contracts and agreements were to be concluded in April 2005, represents an investment volume of US$ 2 bn.

In his acclaimed plenary lecture entitled "Perspectives for the Petrochemical Industry in Mexico” the General Director of PEMEX Petroquímica, Rafael Beverido, made the following comments: "The technical studies for the FÉNIX project have been concluded. One further study, however, is being carried out This will be undertaken by the World Bank and its findings will be available in two months’ time. If we do not dramatically modernize our production facilities, by the year 2006 the value of our petrochemical imports may well exceed the value of our crude oil exports", he said. At any rate, PEMEX has set itself very ambitious goals for the next 20 years and intends to advance from number 5 to number 3 in the ranking of the largest oil producers in the world; it particularly aims to produce more and better petrochemicals in order to be among the top international competitors.

The impending modernization of drilling platforms and the implementation of modern technologies in the Burgos gas fields in the northern part of the country are other important tasks. The large oil fields recently discovered in the Gulf of Mexico are at depths varying from 2,000 to 10,000 metres. This represents a completely new challenge for PEMEX, since most of the drilling it has done until now is at depths of only several hundred metres.

Water treatment represents another major challenge for the country. According to experts, water shortages may begin to affect 11 million Mexicans in the short term. The problem affects not only the metropolitan areas but many other regions of the country as well. Mexico's Ministry for the Environment plans to have 90% of wastewater in Mexico treated by 2025. In this area first privatization projects with foreign capital have already been successfully transacted. Further projects, partly with support from funding measures, will be implemented in the next few years.

The improvement of air quality is another important issue for Mexico where technologies and products of the process industry are relevant. Visitors to AchemAmerica were able to catch up on new developments and trends at the exhibition and congress.

New cooperation between the European Union and Latin America

A very good business climate could be observed on April 12 and 13 during the Latin America – Europe Sector Meetings organized at AchemAmerica on the subject "Technology, Engineering and Equipment for the Chemical Industry and Environmental Technology". At these business meetings, organized by the European Commission within the framework of its AL-Invest Latin America Program, over 200 businessmen (some 50 of them from Europe) met and made contacts on specific projects. Within this program, small and medium-sized companies in particular will be eligible for support to facilitate their entry into the Latin-American market (EuroCenter NAFIN).

Partnerships between European and Latin American companies will also be an important issue of the 7th Research Framework Program of the European Union. Among other things, the European Federation of Biotechnology aims to strengthen cooperation with Latin America in the fields of food, health and agricultural sciences. At AchemAmerica first contacts were made towards this goal at a workshop.

As the President of our partner society IMIQ (Instituto Mexicano de Ingenieros Químicos), Luis Espinosa Ruiz, stressed, the Mexican process industry also wishes to take better advantage of the opportunities that biotechnology offers and to attract investors, both foreign and domestic, to these fertile business fields. In brief: Mexico has a varied and huge potential in its renewable resources that are waiting to be exploited!

Local and international networks – a prerequisite for success

AchemAmerica is organized by DECHEMA – Society for Chemical Engineering and Biotechnology, Frankfurt am Main, whose ACHEMA worldwide concept provides a platform committed to the high standards of ACHEMA in the three foremost economic regions: the EU, the Far East and North America. Only with a strong network of local and international partners can cooperation with the individual target groups and regions be prepared successfully.