Abel EM-100 Successfully in Use for 12 years

The Bottrop purification plant was built between 1991 and 1997 by Emschergenossenschaft at the location of the former Emscher river purification plant. In Bottrop, the sewage of about 1.34 million population equivalents is purified in the plant. 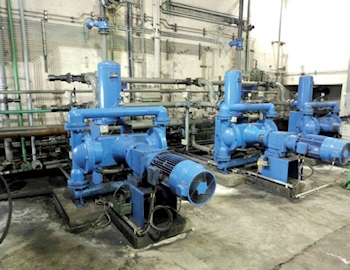 The completely decomposed sludge is dehydrated in chamber filter presses so that the content of solid matter is increased from 5% to 36-42%. Before that, the digested sludge is mixed with brown coal and stone coal, so that the fuel value of the dehydrated sludge is increased; it is then burned in two fluidized-bed furnaces. The energy generated by incineration is used for steam generation. A 3.6 MW steam turbine uses it to generate electrical energy.

Until the end of the 1990s, the ZSB Bottrop used hydraulically driven piston pumps to transport the mix of coal and digested sludge from the fermentation containers. In 2000, these were replaced by three electromechanical Abel Diaphragm Pumps of the EM 100Z1850-SG type. Higher efficiency and lower consumption of spare parts were decisive factors to do so. The pumps have flap valves that permit coarse coal particles as well as larger incrustations that often loosen from the wall of the mixing containers to pass. From the mixing containers, the pumps transport the coal-sludge mix directly into the main flow which leads through a static mixer to the mixing and fermentation containers of the filter press feeding pumps.

The electromechanical Diaphragm Pumps are controlled by means of frequency converters in the pumping quantity range between 10 and 40 m³/h. The pumping pressure is below 2 bar. The pumps run ca. 10 hrs per day and are almost maintenance-free. One monthly visual inspection and one annual service where the flap valves and sometimes the membranes are exchanged have shown to be sufficient.