Xylem generated $275 million of operating cash flow and $234 million of free cash flow in the quarter, representing a conversion of 215%, driven by discipline on capital spending and working capital, as well as favourable timing of interest and tax payments. The Company’s liquidity remains strong, at approximately $2.4 billion, including cash and committed credit facilities.
“Our team delivered operational performance exceeding expectations on both the top line and bottom line,” said Patrick Decker, Xylem’s president and CEO. “Our supply chain continues to be robust, we’re maintaining discipline on cost and capital, and cash generation is healthy. Overall, we’re executing with focus and purpose to make sure our customers can continue delivering essential services to their communities.”

“Despite continuing macro uncertainty, we are serving end-markets that showed signs of increasing stability through the quarter,” continued Decker. “China returned to pre-pandemic growth, Europe grew modestly, and the US, while still lagging other regions, improved sequentially in the quarter. We continue to set strong commercial pace as utilities accelerate interest in transformational technologies that increase operational and financial resilience. Physical distancing is delaying some project revenues dependent on field-work in the short term, and we continue to closely monitor COVID-19 developments. We are well-positioned irrespective of how the pandemic plays out, and set to emerge in an even stronger position.”

Outlook
Xylem expects fourth quarter organic revenue declines in the range of 6 to 8 percent and adjusted operating margin in the range of 13.0 percent to 13.5 percent. Full-year free cash flow conversion is anticipated to be greater than 100%. 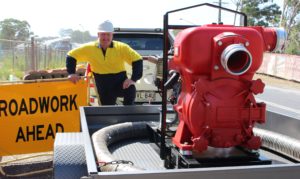 Pumps play a major role in the operation of construction sites. They are indispensable in managing site water and for filling water carts. Australian Pump Industries have developed a large 6” wet prime pump for what has traditionally been a dry prime pump application.