Suppliers of water and wastewater treatment chemicals will generate revenues of over $26 billion in 2014 up 4.5 percent from 2013. This is the latest finding in the McIlvaine report, Water and Wastewater Treatment Chemicals: World Market. 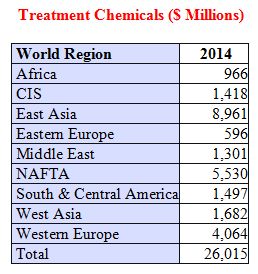 Chinese purchases in the power sector will be in excess of $1 billion. The country will also lead in the municipal water and wastewater segment. In microelectronics, there is a more even distribution among other East Asian countries such as Japan, Taiwan and Korea.

In NAFTA and Western Europe, most of the purchases of chemicals will come from plants that have been in operation for several years or more. The growth in these regions is less than Asia. The one exception is the unconventional oil and gas activity in the U.S. Hydraulic fracturing and other technologies applied to unconventional oil and gas are generating significant new revenues for treatment companies.

In the Middle East, treatment chemicals used in desalination are among the leading applications. Chemicals are required for both thermal and reverse osmosis approaches.

In South America, mining is one of the largest applications for treatment chemicals.